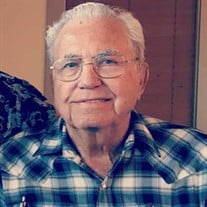 Tucson, AZ — Bobby (Bob) Ralph Bowerman, 84, died Monday, November 25, 2019 at the Northwest Hospital in Tucson following a brief illness. He leaves his wife of 65 years, May Laverne (Thornton) Bowerman; his daughters, Brenda Bowerman and Linda Bowerman; his son, Robert Bowerman and daughter-in-law, Gemma Bowerman; three granddaughters, Tamara Goin and grandson-in-law Randy Goin, Andie Van Dielen, and Sara Bowerman; two great grandchildren, Charlotte Van Dielen and Randall Goin; and many close friends. He was preceded in death by his 6 older siblings, Juanita Meek, Buel Bowerman, Joleta Levy, Noeta Hively, Dewey Rance Bowerman II, and Wanda Blair. Born and raised in Ada, Oklahoma, the son of Dewey Rance Bowerman and Bessie Zena (Owens) Bowerman, he lived there until the age of 13 when they moved to Clifton, AZ. Around 15 years old, he moved with the family to Fresno, CA. He met his wife, May Thornton, in Fresno, CA when they were both just 15 years old. They were married in 1954 at the age of 19. He also joined the U.S. Air Force in 1954 where he served as a Military Policeman near the end of the Korean War. After serving with the Air Force, Bob and May moved to San Manuel, Arizona where he became employed by Magma Copper Mine for approximately 17 years. In the early 1980’s, following his mining career, he started his own business, Bowerman Backhoe Service. He not only took pride in his business, but truly relished the friends he made during his time in business. A memorial service will be held December 28th at 11:00 AM at the Church of God of Prophecy located at 3002 E Glenn St, Tucson, AZ 85716 for all who wish to attend.

The family of Bobby R. Bowerman created this Life Tributes page to make it easy to share your memories.

Send flowers to the Bowerman family.