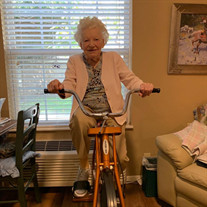 Catherine “Kay” (Constantine) Penny passed away Sunday, December 6th at the age of 103. She was born in Brooklyn, New York on May 1, 1917 at the time of World War I and when the world would soon battle the Spanish Flu. Growing up in a family with three siblings, she lived through the Great Depression and a difficult family life, which she escaped by burying herself in her schoolwork and becoming a top student. She attended Bishop McDonald Memorial High School in Brooklyn where she had one of two perfect scores in the entire state on the New York State Regents exam in Algebra (it is given as the final exam statewide). This earned her a scholarship to St. Joseph’s College for Women also in Brooklyn. After graduating she worked as a proofreader and editor for the National Process Co. in Manhattan from 1939 to 1945. She met her husband Stanley Penny (DVM) when she took their dog to the veterinarian. They were married on July 23, 1944. Shortly before World War II she took flying lessons before she even had a driver’s license. She was mother to Stan Jr., Leslie, Richard, and Robert. She was a grandmother of five and great-grandmother of three. They moved from Brooklyn to Bayport in 1968 and then to Arizona full time in 1993. She was proceeded in death by her husband in 1997 and her grandson Richie Penny in 2014. After 53 years of marriage, she met M. Orin Trabert and shared a loving relationship with him for 20 years. They continued to explore the southwest with their adventure groups just as she had been doing since she started coming to Arizona. After his passing the lockdown at her assisted living facility in Arizona took its toll on her. Two weeks ago, at her residence there was a case of Covid-19 with an employee who was asymptomatic. Seven residents and 4 employees were infected with Kay being one of them. She had been in amazingly good health at this point and was still riding her 1970 gold Schwinn exercycle 3 times a day. It only took 11 days for her to succumb to this terrible virus. Ironically she survived the Spanish Flu but not the Covid-19 virus. She has been a wonderful mother, beloved by all who have known her. She is admired for her intelligence, resiliency, sense of adventure, and ability to find the beauty in everything. She was an amazing, loving, caring, thoughtful, understanding, beautiful, extra special mom and will greatly be missed by all who have come in contact with her. Because of the Covid-19 pandemic a memorial service has not been planned. If you wish to make a donation in her memory, please do so to Harmony Hospice in Tucson.

Catherine &#8220;Kay&#8221; (Constantine) Penny passed away Sunday, December 6th at the age of 103. She was born in Brooklyn, New York on May 1, 1917 at the time of World War I and when the world would soon battle the Spanish Flu. Growing up... View Obituary & Service Information

The family of Catherine Antoinette Penny created this Life Tributes page to make it easy to share your memories.

Send flowers to the Penny family.