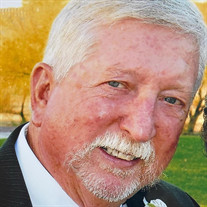 Tucson- Charles (Chuck) McGullam, 78, died unexpectedly January 10, 2022. He was born February 13, 1943, to George and Susan McGullam. Chuck graduated from Edison High School class of 1961. Following graduation Chuck followed his passion for music, played with some local bands and even played the famous song “The Twist” while Chubby Checker sang the lyrics in Atlantic City New Jersey. The band that he played with was successful enough to cut a record. This is where he met his wife of 59 years and the love of his life Kathy and settled with his family in Tucson Arizona. He started his career in Tucson in the construction industry with BFL Construction where he retired with more than 30 years as a well-respected Superintendent. He was instrumental in the growth and development of Tucson in every aspect from local major hospitals, education facilities and financial institutions. With his many years of experience he has had the opportunity to instill his knowledge and wisdom to fellow coworkers. Chuck was a devoted husband, father and grandfather and when he wasn’t making priceless memories with his grandkids or great grandkids you could usually find him shooting his bow as he was an avid archer competing for several years in various tournaments. He was a mentor to so many people in life, and in his passion for archery. He was known for his quiet but fun loving personality, his gentle smile, the Arizona Wildcats and his special and best friend Buddy. In addition to his parents he was preceded in death by his brother Jack, brother Junior, sisters Suzanne, Dorothy, Miriam, and Faith. Surviving in addition to his wife Kathy are his children Christene (Jarrod) and daughters Brittany (Jason), Tara (Jordan) and Alexis. Mike (Shawn) daughter Victoria (Nick) and son Dakotah (Jessica). Kimberly daughters Caleena (Junior), Kaytlen and son Kenton (Kiersten). Along with his 13 great grandchildren Dakota, Marnae, Tanner, Liam, Molly, Giovanni, Kaylee, McKinzlee, Karter, McKenna, Malia, Honestee (Honey) and Calvin. The best dad anybody could have! A service of remembrance will be held Monday, January 24, 2022 at 1:00 p.m. at Evergreen Cemetery address 3015 North Oracle Road, Tucson, Az 85705.

The family of Charles Christopher McGullam created this Life Tributes page to make it easy to share your memories.

Send flowers to the McGullam family.