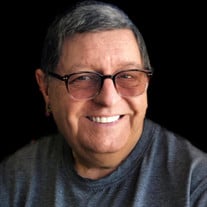 Charles Harry Redman III of Tombstone, age 64, passed away Saturday, January 30, 2021 at Tucson Medical Center, following a severe bout with Covid-19. Harry was born April 1, 1956, in St. Charles Illinois, the only son of the late Charles and Marilyn Redman Jr. He is survived by cousins that he was very close to, Cindy Hilton of Minnesota and Edward Crosson of Texas. Harry was a devout Christian, a beloved friend to many of us in Tombstone and Tucson, and a caring, helpful neighbor. We all have unique gifts from God, and Harry's was music. At six years old, he began piano lessons, and soon was playing both piano and a large pipe organ at his childhood church. In teenage, his family moved to Santa Fe, New Mexico, where Harry took a college degree in music theory. He continued playing and acting as music director at Catholic and Episcopal churches later on when he and his mother moved to Tucson, where he worked managing several large residential complexes. Here in Tombstone, he served as co-musical director at the Community Congregational church, and also sang and played the piano, most recently on Christmas Eve at the Community church and on Christmas Day at St. Paul's Episcopal church, singing the classic Christmas carols of our childhoods, bringing joy to our hearts at this special time of year. Harry loved buffalo burgers at the OK Café, and the air-fried French fries at the Antique Mall. Favorite places that he enjoyed so much, and is sadly missed by his friends there. Harry also loved cats. Had four of them, called them 'his boys', and gave them the very best of care and attention. Two of his cats, brothers, are up for adoption now at the Tombstone Animal Shelter. They have Harry's personality – loving and friendly. Harry will be long remembered by those who knew him. He was a good man, charitable and deeply compassionate, thankfully now in the hands of God in heaven, free of pain and suffering. Funeral services will be arranged soon by Harry's pastor, Butch Sliker at the Community Congregational church, assisted by priest Heather Rose from St. Paul's Episcopal.

The family of Charles Harry Redman III created this Life Tributes page to make it easy to share your memories.

Send flowers to the Redman family.