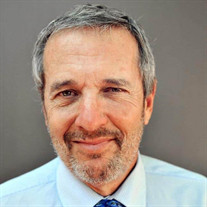 For those of you we have been unable to reach, let it be known that David A. Ruben, M.D., MBA has departed from our lives. David (74 years) has been a lifelong Tucson resident; a ‘1940’s baby boomer. First son to Sam and Adeline Ruben, David was destined to become a doctor. He touched the lives of countless individuals through his medical practices, academics, marriage(s), extended family, and eccentric friends. David lived ‘outside the box’, orthodox in his passions as a non-conformist. If he rubbed you the wrong way, he knew that he had your attention. And your attention was important to him. He wanted people to ‘wake up’, out of the soma of their lives. To David, that soma was embodied in the trappings of the modern world: planned obsolescence and ramped consumerism, couch-potatoed T.V. viewers, pounding empty carbs, political sound bites over thoughtful discourse. David was process oriented in a goal driven society. He was all about the interactions, so any outing or endeavor became a journey- much to the frustration of those who dared to tag along. He lived his beliefs, wearing tattered shorts instead of the latest Nike fashion, carried an old flip-phone, pulled & straightened nails and reused the lumber, and he read voraciously and spoke eloquently about his views. He wrote poetry, and self published books on the foibles of technology and relationships, seemingly for his eyes only. His body and mind were his Temple. An omnivorous vegetarian that foraged the fridges of countless homes. An athlete and purist, refraining from intoxicants, preferring his fine mind and body. His generosities touched many lives, often obscured by their seeming lack of altruism. He was a good brother, father, son, and friend, if one chose to look beyond his imperfections. He will be deeply missed. David was father and parent to five adult children and their multitudes. Survived by siblings, cousins, nephews, nieces, grandchildren, great grandchildren, and by all of you out there reading this. Funeral services will be held December 2, 2021 at 10 am at Evergreen Cemetery. Family will be holding a gathering for food and drinks following the services at Rio Vista Park 3947 N. Tucson Blvd

For those of you we have been unable to reach, let it be known that David A. Ruben, M.D., MBA has departed from our lives. David (74 years) has been a lifelong Tucson resident; a &#8216;1940&#8217;s baby boomer. First son to Sam and Adeline... View Obituary & Service Information

The family of David Alan Ruben M.D. created this Life Tributes page to make it easy to share your memories.

For those of you we have been unable to reach, let it be known...

Send flowers to the Ruben family.