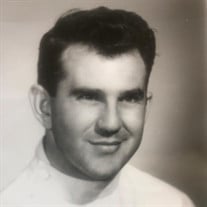 Donald A. “Bert” Bertolini, D.D.S., M.D., passed away peacefully in his sleep on Saturday, February 5, 2022. He was born on October 27, 1928 in Chicago, Illinois and moved to Tucson to accept a baseball scholarship playing for the University of Arizona. While there he was drafted into service during the Korean War and served as a Corp Man taking care of the wounded. After serving his country, he returned to the University of Arizona with a new passion for health care. While attending the University of Arizona, he met the love of his life, Shirlee and they were married in 1956 after she graduated. He went on to Dental School, earned his DDS degree and after returning to Tucson, with Shirlee’s help began a Dental practice that served Tucsonans for 35 years. Bert was the consummate caregiver and after retiring from Dental practice, he applied for and was accepted into medical school, receiving his M.D. degree and began practicing in Pain Management which he did for 20 more years, finally retiring in 2015 after an amazing career in healthcare. Bert was a passionate and sometimes fanatical University of Arizona Wildcat fan who faithfully attended and very rarely missed, football & basketball games at home and away since 1960! He always sat with and traveled with the University of Arizona’s Pride of Arizona marching band, while supporting his wife during her 65-year tenure coaching the Twirlers. Some of his fondest memories are of cheering on the Wildcats in Bear Down Gym, long before they received the national recognition of latter teams. Bert was always there to support band members, Twirlers and Poms at home games, and he frequently traveled with the squads to away games. When not at a Wildcat game, he was active overseeing the family’s extensive breeding program for Double Registered Quarter Horse Palominos that produced foals for sale every year for more than 20 years until the boys went to college. He is survived by his loving wife of 66 years, Shirlee, sons Dana and Darin (Tammy), 6 grandchildren and 8 great-grandchildren. In lieu of flowers or other remembrances, donations can be sent to his beloved charity supporting his wife’s 65-year career at the University of Arizona: The Shirlee Bertolini Twirling Scholarship Fund/UA Twirlers. Checks can be mailed to: University of Arizona Foundation, P.O. Box 210109, Tucson, Arizona 85721-0109. Arrangements provided by Evergreen Mortuary.

The family of Donald A. Bertolini created this Life Tributes page to make it easy to share your memories.