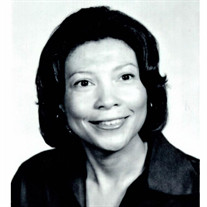 Doris Naomi Pettie, referred to as "Omi" by her grandson, was born on February 25, 1933, in Philadelphia, Pennsylvania to William and Adele Pettie. She was the second of four children, Lorraine, herself, William and Lynwood. Her father, a carpenter, and mother instilled in Doris and her siblings a foundation of faith attending Miller Memorial Baptist Church in Philadelphia. People remember that as a young child Doris enjoyed music, socializing with friends and being with her older sister. After graduating from High School in Philadelphia, Doris attended Hampton Institute (now Hampton University) returning home to Philadelphia after the death of her father. She became a certified X-Ray technician, and later after her children grew older, Doris returned to college. She received a bachelor's degree in Public Administration from the University of Arizona in 1972, graduating with high distinction. After graduation she worked as a volunteer social worker for the YWCA and other community organizations. On June 7, 1957, Doris married Dr. Joseph S. Whaley. They raised two children, son Craig and daughter Dawna (Tai). Doris was a devoted wife and mother and an active member in the community. She had the gift of hospitality and the desire to bring joy to others by providing a warm welcoming home. Her children and others close to her reminisce about the meals she would prepare with something that each of them would love to eat. She hosted bridge parties, social gatherings, club meetings and prepared a comfortable place for traveling family members and close friends to visit, vacation, rest and enjoy. Doris's community, social and faith activities included attending Mount Calvary Missionary Baptist Church. Doris is a Golden Soror of Alpha Kappa Alpha Sorority, Inc. having served in the sorority for 50 years. For many of these years, Doris was the sorority's graduate advisor at the University of Arizona. Doris was also a member of Links, Incorporated, and while a participant in the organization she served in a variety of positions over the years to include President and Cotillion Chair. She had a passion for art and dabbled in painting. Working with oil-based paints and charcoals were some of her favorites. Doris and her husband Joseph were a couple very much in love with each other. They enjoyed traveling to world destinations of which their Mediterranean cruise was one of their favorites. Doris was an avid bridge player. In addition to playing socially with friends and family, she played at the Adobe Bridge Club in Tucson, travelled throughout the United States playing in tournaments and proudly achieving the Silver Life Master level. She was preceded in death by her father William, mother Adele, sister Lorraine, brother William, and husband Joseph. She is survived by son Craig (Janet Munro), daughter Dawna (Joseph Dupree), brother Lynwood (Cheryl), grandson Joseph, as well as many cousins, nieces, and nephews. Due to the coronavirus, there will not be a funeral service; however, there will be an online celebration of life at a later date and time to be announced by her children.

Doris Naomi Pettie, referred to as "Omi" by her grandson, was born on February 25, 1933, in Philadelphia, Pennsylvania to William and Adele Pettie. She was the second of four children, Lorraine, herself, William and Lynwood. Her father, a... View Obituary & Service Information

The family of Doris Naomi Whaley created this Life Tributes page to make it easy to share your memories.

Doris Naomi Pettie, referred to as &quot;Omi&quot; by her grandson, was...

Send flowers to the Whaley family.