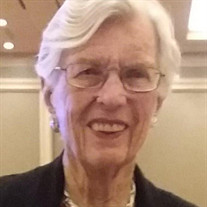 Dorothy Jean DeWitt Hansen, passed peacefully on February 4, in Tucson, Arizona, at the age of 92. Jean was born January 30, 1930, in Elgin, Illinois, to Lyla Baird and Reuel DeWitt. Jean lived in Albuquerque, NM and served as a Civil Air Patrol Cadet before graduating from Elgin High School. She attended Western New Mexico University where she earned her BS in education, then proudly served in the United States Marine Corps from 1951-1954 before returning to university to attain her Masters Degree and continued to be a loyal alumnus of WNMU. Jean began her teaching career in Willcox, Arizona, where she caught the eye of Frank Hansen and the two married in 1961. Together they continued teaching and touching lives in Willcox, Morenci, Douglas, Amado, and Tucson. Jean loved spending time with her family, traveling, reading, golfing, bowling, playing Scrabble, and enjoying a good beer with friends. Jean served during the Korean War, was a member of the Women Marines Association, the Green Valley Marine Corps League, and the American Legion. In 2015, Jean was honored for her Civil Air Patrol service with a Congressional Gold Medal. Jean was preceded in death by her parents, husband Frank, and sister Carol (Bill) Stockbridge. She is survived by her children John (Kremena) Hansen of Arlington, VA, and Kathy (Edward) Hansen Sweeney of Redwood City, CA, brother Baird (Dorothy) DeWitt, sister Susan (Les) Carter, 7 grandchildren (Michael, Preston, Blake, Luke, Erin, Maya, and Zack), and nieces and nephews. In lieu of flowers Jean requested donations to Youth on Their Own, 1660 N. Alvernon Way, Tucson, AZ 85712 or a community food bank of your choice. A special thanks to the caring people and friends at The Cascades for their love and concern. A memorial service will be held on Sunday, May 1, 10 am at Evergreen Mortuary Chapel (3015 North Oracle Road, Tucson).

The family of Dorothy Jean Hansen created this Life Tributes page to make it easy to share your memories.

Send flowers to the Hansen family.