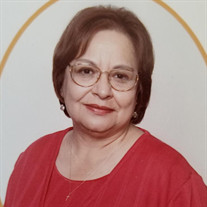 Frances D. Fernandez of Tucson, Arizona passed away peacefully on Sunday, March 14th. Frances was born on August 8, 1943 in Sonora, Mexico to Maria Tapia Darmer and immigrated with her family to the United States in 1948. Frances attended Tucson High School and worked for Sunnyside School District. She raised a family of five and enjoyed being a mother and grandmother to her 10 grandchildren (Monique, Debbie, Derek, Joseph, Danny, Danny Jr, Eric, Genevive, Ronin and Paisley) and subsequently, her great-grandchildren. Frances enjoyed spending time with family, especially during the holidays, the big Christmas Eve gathering and New Year’s Eve. She loved cooking traditional Mexican cuisine, especially tamales and menudo, and was a master at it! While she was considered down-to-earth, and some might even say low maintenance, she really enjoyed “spa” time and being pampered by the granddaughters and grandnieces in the family. She was an avid fan of the oldies like Elvis and Lawrence Welk; and anyone who knew her, knew she loved animals, had a great sense of humor and could make you laugh! She is predeceased in death by her eldest daughter Lillian G. (Fernandez) Howard and her older brother Roman E. Darmer. Frances is survived by her mother, Maria Darmer, her children John T. Fernandez, Yvonne Fernandez, Christine Anaya (Jimmy), Daniel Fernandez Sr. (Michelle), her younger brother, Silver Darmer (Rebecca), extended family to include her sister-in-law Marie, several nieces and nephews, their family, and friends. Frances was loved by many and will be missed dearly. A memorial service will be held at her son Danny’s house on Saturday, April 3rd, 2-4PM, 7207 S. Valley Stream Dr. (Tucson).

Frances D. Fernandez of Tucson, Arizona passed away peacefully on Sunday, March 14th. Frances was born on August 8, 1943 in Sonora, Mexico to Maria Tapia Darmer and immigrated with her family to the United States in 1948. Frances attended Tucson... View Obituary & Service Information

The family of Frances D. Fernandez created this Life Tributes page to make it easy to share your memories.

Send flowers to the Fernandez family.