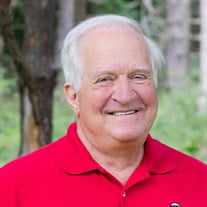 George F. Bruzenak passed away suddenly on October 21, 2021, while playing golf, a game he loved. George was born in Eveleth, Minnesota on January 16, 1943 to George and Anne (Hirsch) Bruzenak and grew up there. He had 4 siblings, three predeceased him. His oldest sister, Betty Jean, resides nearby in Aurora. After graduating from high school where he was on the swim team, George joined the Air Force. He was stationed for his first two years at Elmendorf Air Force Base in Anchorage and survived the 9.2 Alaska Earthquake of 1964. In 1964 he married Susan Dermen. They had two sons: Ian and Scott. He earned an associate degree in computer science and received extensive computer training from Control Data. He had a continual quest for knowledge. He was an avid reader, interested in history, cooking, how-tos and many other subjects. He was an ardent hunter and fisherman. George was a devoted father, taking his sons hunting, skiing and refereeing soccer games for their local soccer league. He enjoyed watching his grandson Bohdan become involved in and excelling in sports, music, academics and the outdoors. After training, George worked as a computer engineer, traveling extensively for Control Data, Digital Equipment and Philips, testing and troubleshooting mainframe computers at places like NASA and Synclavier Digital. He retired in Colorado Springs in the late 90s, where he continued to care for his wife Susie, who passed away in 2002 after a long illness. George was a real Renaissance man. He had many hobbies, often delving into them in great depth. He made bows and arrows for himself and his boys, tied fly fishing lures, and even made a wooden canoe (complete with a PowerPoint presentation documenting the construction!). He took up golf again in 2008, although this time he didn’t make his own clubs. He was an avid hiker, cyclist, downhill and telemark skier. George was a self-taught photographer in his 30s and then took up painting in his 60s, starting with watercolors, then acrylics before settling on water-based oils. He was the membership coordinator of the Sonoran Plein Air Painters, joining them on a number of paintouts. He also tried his hand at charcoal and figure drawing and took a many art classes both locally and further afield. George was also an animal lover. He loved his dogs: Sam, the beagle, Ralph, the Schnauzer, and McDuff the Scottish terrier who also traveled full-time in the New Horizon 5th wheel George had designed. After Susie passed away, he traveled in his RV for a few years before meeting Jaimie Hall. They married in 2007, traveling part-time in their RVs, and living in Pine and Tucson, Arizona. He leaves behind his wife Jaimie, sons Ian and Scott, their wives Shawndae and Ariel, and grandson Bohdan; also, sister Betty Jean Turk, several nieces and a nephew, and the first cat he ever owned, Tucker. He became part of and was beloved by Jaimie’s extended family. A family service will be held in New Harbor, Maine next summer at the family cottage where George spent part of many summers for more than 50 years. George did donate to a local food bank through our mobile home park but we would especially love for you to share your memories.

George F. Bruzenak passed away suddenly on October 21, 2021, while playing golf, a game he loved. George was born in Eveleth, Minnesota on January 16, 1943 to George and Anne (Hirsch) Bruzenak and grew up there. He had 4 siblings, three predeceased... View Obituary & Service Information

The family of George Frederick Bruzenak created this Life Tributes page to make it easy to share your memories.