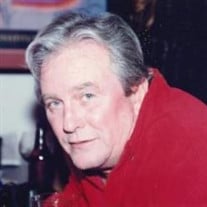 Gerald Lee Megerle, best known as “Jer Meg”, was born in Covington Kentucky. Passed away on January 12, 2021 at home. He moved to Tucson and split his allegiance between the Kentucky and the Arizona Wildcats. Jerry held season tickets to Football and Basketball for decades. He worked as an Electrician and was a member of the Electrical Workers IBEW 570, humbly receiving his 50-year pin in 2019. Jerry worked at Raytheon as an Electrical/Mechanical CAD designer when he retired. Jerry was an avid golfer and loved photography. He took classes in Photography at Pima Community College, also took a class in Charcoal drawing and beginning Watercolor at the Drawing Studio. Jerry was very creative and could fix just about anything. Jerry assisted with Golf tournaments where he created large boards of sponsors and participators with photographs of the events he had taken. He liked to keep up with news (bad or good) he would say “You have to be informed about what is going on”. Jerry enjoyed history when traveling he would always pick up a small book of the place he was at “IMAGES of America …….”. He devoted a lot of time on his family tree where he had Five generations back from his parents well documented with birth and death certificates; he joined the Genealogy club. He would assist others to find a maiden name or lost relative. Jerry was an amazing person and a very close friend to many. He will be missed dearly by Family and Friends. He is survived by his loving wife Martha and his sons Scott (Kathy) and Spencer. Grandchildren with Great Grandchildren, Michael (Rebekah and daughters Ruthie & Gwenie), Samantha (twins Ava-Mae & Grayson), Austin (Madison and children Lyam, Layla & Andrea), Jeremiah and Jessie and Godson Sean. Jerry has a large family in Kentucky, still two brothers Jim (Darlene their four children and many nephews and nieces), Johnny (Janice their four children, plus nephews and nieces). Youngest brother in Tucson Jeff (Chris with two daughters and their families). Jerry is predeceased by his parents, Robert J. Megerle and Velma Mae Megerle, his loving sister Joan Campbell, oldest brother Robert ‘Bobby Carl’. In lieu of flowers the family requests a donation be made to First Tee of Tucson or a charity of your choice.

Gerald Lee Megerle, best known as &#8220;Jer Meg&#8221;, was born in Covington Kentucky. Passed away on January 12, 2021 at home. He moved to Tucson and split his allegiance between the Kentucky and the Arizona Wildcats. Jerry held season tickets... View Obituary & Service Information

The family of Gerald Lee Megerle created this Life Tributes page to make it easy to share your memories.

Send flowers to the Megerle family.