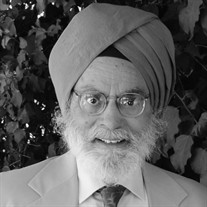 Harbans Singh Bhola, beloved husband, father, grandfather, friend, professor and mentor, was born in Punjab, India on May 5, 1932 and passed away peacefully in his Tucson home on April 9, 2021. As his health declined over the past several months and in his final days, he was surrounded by those he loved. Harbans had a long and extraordinary life. He impacted many people all over the world in important and positive ways, both through his work and through who he was as a person. He’ll be remembered for his humor, his deep intellect, and his didactic bent. Most importantly, he will be remembered for his enormous capacity to express his love and affection to his family, his friends, his students, his colleagues, and all his fellow travelers in his life. Full of joy and always ready for adventure, he traveled the world with his beautiful wife, Joginder Kaur, and their children at his side. A man of many words, he loved to share recollections of his life and travels, especially with his grandchildren. In the memoir he wrote for them, he beautifully intertwined historical references of India and Sikhism with his own personal story. Believing they were “true denizens of the Global Village,” he wanted them to embrace their multi-ethnicity and understand their history. His biggest gift to them was passing on his innate curiosity and love of learning. Professionally, Harbans will be remembered for his thirty plus years as a cherished professor of Educational Leadership and Policy Studies at Indiana University and his enormous impact on the field of Adult Literacy. After earning degrees in from Punjab University; BAs in Physics and Mathematics and MAs in English Lit and History, he moved to the US to earn his PhD in Education from Ohio State and an MS from Indiana University. He returned to Lucknow, India in 1966 to work as the Deputy Director for the Literacy House but was soon selected as Senior Advisor to the UNDP/UNESCO Pilot Project on Work-Oriented Adult Literacy, in Tanzania, East Africa. His work with Adult Literacy won him numerous awards and accolades. Over the span of his career, he spoke at countless international conferences, evaluated mass literacy campaigns in a number of countries, published over 186 papers, and authored numerous books. He never lost his passionate commitment to adult education and his belief that literacy is both a right and necessity. Everywhere he went, he built friendships that would last throughout his life. Harbans is predeceased by his parents, his sister Kaushalya and brother-in-law Bakshish Gahley, sister Rani, sister Santosh and brother-in-law Harbans Likhari, brother Gajinder and sister-in-law Inderjit, and his brother Bhupinder. He is survived by his wife of 62 years, Joginder Kaur Bhola, his children Poonam and Khushvant (Amy), and his three adored grandchildren, James Moore and Mason and Lily Bhola. Harbans is also survived by many well-loved relatives, his sister-in-law Indergeet, countless nieces and nephews and their families, and his many cherished friends. We will all miss him beyond measure. In lieu of flowers, memorial contributions may be made to the Professor Harbans S. Bhola Fellowship at the School of Education, c/o IU Foundation, P.O. Box 6460, Indianapolis, IN 46206-6460.

Harbans Singh Bhola, beloved husband, father, grandfather, friend, professor and mentor, was born in Punjab, India on May 5, 1932 and passed away peacefully in his Tucson home on April 9, 2021. As his health declined over the past several months... View Obituary & Service Information

The family of Dr. Harbans Singh Bhola created this Life Tributes page to make it easy to share your memories.

Send flowers to the Bhola family.