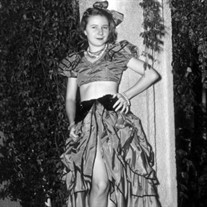 Harrilu “Judy” HALL (Rich, Mustafa, Torok) was born at St. Mary’s Hospital, in Dec 1926, in Tucson and she was as unique as her name hints. Growing up in The Old Pueblo during the 1930s & 1940s she enjoyed thoroughly all the beauty of the desert, but loved to travel as far and wide as any opportunity allowed. She grew up surrounded by family, and lifelong friends from the Immaculate Heart Academy, Rainbow Girls, and Alice Mills’ Dance Studio. A 1944 graduate of Tucson High School she married H W Rich, an Army Air Corps pilot that summer. After the death of her father, in the fall of 1946, the couple moved to Southern California, which would be her home until the late 1960s. “Judy”, and second husband M W Mustafa, would return to Southern California late in the 1970s, after a few years in Massachusetts, and three and a half years as residents of Bagdad, Iraq. In the early 1980s she would meet her final partner, William Torok, and the two would travel the world together until Bill’s death in July 2018. Any conversation with “Judy” was bound to mention that she had been around the world TWICE (once in each direction) and visited 85 countries. She returned to the Old Pueblo to rejoin family, and other long-lived friends, after Bill’s death. She spent her remaining two and a half years counting the finches and doves visiting her back porch feeder at The Fountains of La Cholla. A broken hip from a fall, requiring surgery and rehab, leading to a positive COVID diagnosis, meant her loved ones could not be with her at the end of her earthly stay. Harrilu died very suddenly at the Life Care Center, Tucson, after lunch on the 26th of Jan. Her immediate family will bid her Bon Voyage one last time on 25th February, at the family graveside in Evergreen Cemetery—which has been the resting place of more and more family members since 1920. “Judy” was predeceased by her parents (Harry S HALL & Alma Lavada PRICE), infant brother (John HALL IV), infant great grandson (Mars), and numerous cousins. She is survived by three children (Jean, Joan, and Mo); grandchildren (Leo, Cheryl, Chris, Conner, and Ryan); great grandchildren (Chase, Landon, and Zoe); and a multitude of cousins, from coast to coast.

The family of Harrilu Hall Torok created this Life Tributes page to make it easy to share your memories.

Send flowers to the Torok family.