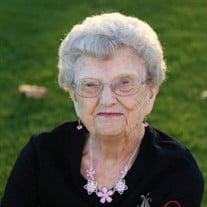 On Friday, December 4, 2020, Helen L Musselman, passed away at the age of 103. Helen was born on June 20, 1917 in Ottumwa, Iowa to Fanny and James Glentzer, and middle child to her 9 brothers and sisters. She moved out to Tucson from Douglas in 1945 when her Husband, Darvin "Poppy" Musselman, was released from the military in order to provide for his family. From there, they started their dream in the motorcycle business. They opened up a little service shop in an old gas station near downtown Tucson and received their first business license in 1945. They purchased land and attempted to build the business of their dreams at 2302 N Stone Ave, but because of WWII, they had issues getting materials to do so right away. They were finally able to move into the business in 1948, dubbing it Musselman Indian Sales, and it was there both her and her husband lived with their Daughter Donna, and worked every day. The business continued to grow even more when they got the Honda Franchise in 1959, changing the name of the business to Musselman Honda Center, and opening another shop on the East side of Tucson, Honda of Tucson, in 1963. When they sold Honda Of Tucson in 1985, the combined inventory and with the increase in products and customer attention, they were forced to move out into a home of their own, just a couple miles away from the shop. Helen lived to work in the business that she and Pappy had built together and did so up until she was almost 103. Due to her and Poppy's hard work and dedication, Musselman Honda Center is still there, at the same address, 72 years later, run by the family they spent 40 years grooming, resulting in the still thriving business it is today. It was a way of life for her and she loved every minute of it and left a legacy that her family will uphold for people to enjoy for many more years to come. For those of you who would like to know more about her story, Musselman Honda Center has a museum dedicated in her honor. Honda also released a video on YouTube called Honda Kokoro #2-Helen On Wheels, as well as the Tucson Newspaper and Channel 9 News doing several interviews with her. Helen was preceded in death by her mother Fanny, her father James, her husband Darvin "Pappy" Musselman, and her daughter Donna Jean Musselman. She is survived by her brothers Jim and Gene Glentzer, Grandson Mark Kingsley, her 2 Great Granddaughters Shaunna and Dawna Kingsley, and her 5 Great Great Grandkids, Makayla, Amiyah, Nathaniel, Vanessa and Madeleine.

On Friday, December 4, 2020, Helen L Musselman, passed away at the age of 103. Helen was born on June 20, 1917 in Ottumwa, Iowa to Fanny and James Glentzer, and middle child to her 9 brothers and sisters. She moved out to Tucson from Douglas... View Obituary & Service Information

The family of Helen L. Musselman created this Life Tributes page to make it easy to share your memories.

Send flowers to the Musselman family.