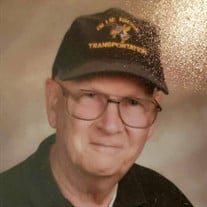 Jack Allen Conrad, 80, of Marana, Arizona, passed June 09, 2020 surrounded by his wife, daughters, and grandchildren . Jack was born to Grover and Beatrice, October 14, 1939, in Hamilton, Ohio. After graduating from Amphi High School in 1957 he married Bonnie in 1960. Over the years they moved to and from California, Indiana, and Arizona with children in tow. Their three daughters marked the first step toward building the uniquely bonded family that never left his side during his final months. Strangers saw him as soft spoken and warm. Those who knew him, knew this stemmed from his faith in God. Jack lived his life as a servant and messenger of the Lord. God's will for him has lead him to various roles that enabled him to share Christianity with others. He's been a Sunday School teacher and an Elder of the Church to name a few. Jack once stated that if he could have a dying wish, it would be for all the people he loved to find their way to Christ. His children remember him as a man that valued integrity. Jack believed your actions should be completed with conviction and others should be treated with compassion. With three generations of women growing up around him he often stressed the importance of self worth. Jack worked for Coca Cola Food Company as a sales representative until he retired in 1981. Through the years he continued working as a sales representative with other companies like Dugan & Doss and Acosta. The job he loved the most came in 2008 when he drove a school bus for the Blue Ridge School District. This was a job that could exhaust him, but he was happy doing it. Kids, parents, and teachers all loved Jack and he too found joy in the children that he had been trusted to keep safe on the trips to and from school. Interactions with parents were pleasant and often resulted in receiving baked goods during the holidays. Faculty would often request he be the driver on field trips and away games. He will be missed most by his wife of sixty years, Bonnie Conrad. Together they created a family uncommonly close and devoted to each other. Jack leaves behind a long legacy beginning with his three daughters; Cindy Miller (Dennis), Robbin Keran (Doug), Gayle Smith (Roger). He also leaves to cherish his memory four grandchildren, six great-grandchildren, one great-great-grandchild expected in October, and two sisters. He was preceded in death by his brother Jim Conrad and their parents Grover and Beatrice Conrad. The family requests that donations be made to the Red Cross at: www.redcross.org/donate/blood-services-donation.html. To ensure the health and safety of our community, we are following all guidelines set by local, state and CDC officials. If you are planning on attending a service, please contact the funeral home in advance, so that we can plan accordingly.

The family of Jack A. Conrad created this Life Tributes page to make it easy to share your memories.

Send flowers to the Conrad family.