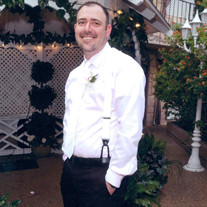 James Alan Martin, 35, of Oro Valley, Arizona went to be with the Lord on October 17, 2019 in Loving County, Texas. James was born to parents Gary Martin and Tina Flowers on February 8, 1984 in Bakersfield, California. Anyone who knew James without a doubt would describe him as a very down to earth and easy going guy. He had the ability to make anyone smile and laugh. He always put his family and friend’s happiness before himself. He was an avid fan and loved the Oakland Radiers and Los Angeles Dodgers. On his days off he enjoyed golfing and BBQ-ing, he was always the one to cook for everyone because he loved it so much. James caught the eye of love of his life Jeanette Liggett and the two tied the knot surrounded by friends and family in Las Vegas, Nevada on April 24, 2016. He was an amazing husband, father, son, brother, cousin, nephew, and grandson. James worked for Helmerich and Payne as a Derrick Hand and took much pride on his work on the oilfield. He built a strong bond with his coworkers on the rig and considered all of them his brothers. The biggest enjoyment for him was coming home on his days off to his super excited furbabies jumping on him and giving him unconditional love. James is survived by his loving wife Jeanette Martin; daughter, Alix Martin; and stepson, Hunter Fullen. He is also survived by mother, Tina (Edward) Ferrell of Bakersfield, California; sisters, Amber (Jordie) McPherson and Jessica Flowers; and brother, Kenny (Vicky) Wood Jr.; his extended family; mother-in-law, Betty (Norm) Rung; father-in-law Charlie (Debbie) Liggett; sister-in-law’s, Christina (Shawn) Sullivan, Liz Liggett (Bobby) Bunn, and Megan Liggett; and brother-in-law, Richard Liggett. James also leaves behind his beloved furdoggies; Bandit, Loki, Koda and Raider; and numerous cousins, nieces, nephews, and grandparents. James’ smile and voice always light up the room no matter where he was. He will be greatly missed by all, but his legacy will continue in our hearts and will never be forgotten.

James Alan Martin, 35, of Oro Valley, Arizona went to be with the Lord on October 17, 2019 in Loving County, Texas. James was born to parents Gary Martin and Tina Flowers on February 8, 1984 in Bakersfield, California. Anyone who knew James... View Obituary & Service Information

The family of James Alan Martin created this Life Tributes page to make it easy to share your memories.

James Alan Martin, 35, of Oro Valley, Arizona went to be with...

Send flowers to the Martin family.