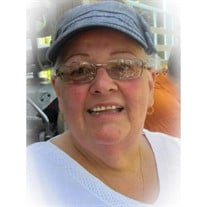 Janet Lee Norton was a loving wife, mother, grandmother, great-grandmother, sister, aunt and friend. She left this world on December 18, 2020 at age 72. She was born to Walter Sr. and Jean Seager on November 12, 1948. She grew up in Lynbrook, NY with her siblings, Lois, Walter Jr. and Tracy. Janet married Paul Nagengast Sr. on April 4, 1970. Janet and Paul moved to Tucson, AZ in 1974 with their children, Amy and Paul Jr. They were married for 26 years until Paul's death in 1996. She had a long career in banking, which she returned to after Paul's death. Past co-workers considered her a mentor and a supportive, good friend. She married her second husband in 2002 and was Joseph Norton's loving wife of 18 years. Joining her family were her stepdaughters, Heather Norton and Catherine Bartruff. Janet enjoyed cooking for her family and hosting large family gatherings, afterwards sitting around the fire-pit and making smores. She loved music and enjoyed singing, playing her piano and seeing Broadway shows. She was an active member in her church, Holy Trinity Lutheran Church. She was incredibly tech savvy and could easily hook up a family members entertainment system and produced many creative family videos. Some of her happiest moments were the time she spent with her many grandchildren and great-grandchildren. She is loved and survived by her husband Joseph Norton, daughter Amy Ranta, son and daughter-in-law Paul Jr. & Christine Nagengast, step-daughter Heather Norton, step-daughter and son-in-law Catherine & James Bartruff, granddaughter and fiancé Ashley Nagengast & Francisco Rubio, grandchildren grandson and fiancé Jonathan Nagengast and Tomas Miller, Lindsey Ranta, JJ Bartruff, Isabel Bartruff, Caleb Bartruff, Rohan Bartruff, Gabriel Bartruff, and Soraya Bartruff, great-grandchildren LeeAnn Rubio and Christofer Rubio, sister and brother-in-law Lois & Helmut Boehl, brother & sister-in-law Walter Jr. & Donna Seager, sister and brother-in-law Tracy & Andy Huber, nephew Peter Boehl, and nieces Patty Boehl and Gina Huber. A online memorial service is scheduled for January 9, 2020. An in-person service will be scheduled for a later date. In lieu of flowers, please donate hospital supplies and/or food for hospital staff to the hospital of your choice on her behalf.

Janet Lee Norton was a loving wife, mother, grandmother, great-grandmother, sister, aunt and friend. She left this world on December 18, 2020 at age 72. She was born to Walter Sr. and Jean Seager on November 12, 1948. She grew up in Lynbrook,... View Obituary & Service Information

The family of Janet Lee Norton created this Life Tributes page to make it easy to share your memories.

Send flowers to the Norton family.