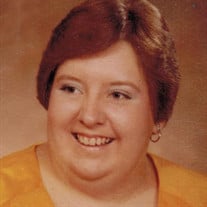 Janet Marie Richmeier passed away May 25, 2020, at Tucson Medical Center in Tucson, Arizona. She was 63. Janet was the eldest child born to Francis Henry Richmeier and Verna Jean (Boyle) Richmeier. She was born October 19, 1956, at St. Elizabeth’s Mercy Hospital, in Hutchinson, Kansas. In 1961, Janet moved to Colorado, with her parents and sister, Judy Ann. A brother, James William joined the family in 1962. Janet attended Denver Public Schools starting with Kindergarten at Goldrick Elementary in 1961. She attended Kepner Junior High and graduated from Abraham Lincoln High School in 1974. Following high school graduation, Janet began working for the Federal Government in various roles. In 1989, Janet moved to the Air Force Accounting & Finance Center, at Lowry Air Force Base, where she was an accountant. Janet was a very talented seamstress. She loved to sew. In high school, Janet began sewing in earnest creating all kinds of garments for herself but was most proud of a fully-lined cold weather cape she had completed. She often created garments from conceptual designs that she had drawn out on paper. Janet also enjoyed hand sewing; specifically, very detailed cross-stitch patterns. She liked to design her own patterns to cross-stitch so her work would be unique. For this reason, the computerized embroidery machine that she owned didn’t get much use. Janet loved to read all kinds of books and periodicals. She loved to cook and often created her own recipes. Janet was a very loving and kind big sister to me; she took a great interest in her nieces and often guided them as if they were her own. Janet was a friend to many and she will be greatly missed. In Colorado, Janet lived in Denver, Lakewood, and Aurora, moving to Tucson, Arizona in 2005. Janet was preceded in death by her parents. She is survived by her sister, Judy Richmeier-Harney (Frank) of Louisville, Colorado; a brother, James Richmeier of Lochbuie, Colorado; two nieces, Bridgett MaryAnne Harney and Bernadette Regina Harney; one nephew, Jacob William Richmeier (Sabrina); and many aunts, uncles, and cousins. Dedication of cremains is Friday, June 26, 2020, in Tucson, Arizona. To ensure the health and safety of our community, we are following all guidelines set by local, state and CDC officials. If you are planning on attending a service, please contact the funeral home in advance, so that we can plan accordingly.

Janet Marie Richmeier passed away May 25, 2020, at Tucson Medical Center in Tucson, Arizona. She was 63. Janet was the eldest child born to Francis Henry Richmeier and Verna Jean (Boyle) Richmeier. She was born October 19, 1956, at St. Elizabeth&#8217;s... View Obituary & Service Information

The family of Janet Marie Richmeier created this Life Tributes page to make it easy to share your memories.

Send flowers to the Richmeier family.