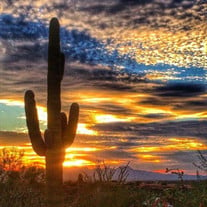 Jay Alan Abrams passed away Saturday, January 16 in Tucson. Jay was born in Milwaukee, Wisconsin October 18, 1947. His father rejoined the Air Force as a regular officer from 1950 until his retirement in 1977 when he and his wife Esther moved to Tucson. Like all military kids, Jay traveled the world and the country with his family, living in Japan and Newfoundland, Canada, among other places. Through all of this time, from middle school on, Jay struggled with mental illness, moving from home for a few years in an attempt to find a cure which would never arrive. He moved back home when his father was stationed in Colorado and moved with his parents to Tucson after his father's retirement, where he lived without a break for more than 43 years. Although his illness kept him from fulfilling his own dreams and fantasies of life, he lived as well as he could. He enjoyed eating out, visiting tourist attractions, visiting his brother and sister-in--law in California, collecting coins, reading about airplanes, cars, and various facts, and in later years, participating in Our Place Clubhouse, a cooperative community for people overcoming or coping with mental illness. He loved Tucson and Arizona. Although the circle of his life shrank with time, he remained unfailingly polite, friendly, and willing to please to the degree his illness and later physical failures allowed; he was beloved by all who knew him and who cared for him. He deserved more, but rarely complained. He is survived by his brother, Barry, his sister-in-law Ellen, his nephew Joseph, cousins and all the friends he acquired in his time in Tucson. Announcements regarding a memorial gathering will appear later. In lieu of flowers, please make donations to NAMI Southern Arizona, https://www.namisa.org/, or to Our Place Clubhouse, https://www.ctftucson.org/donate.

Jay Alan Abrams passed away Saturday, January 16 in Tucson. Jay was born in Milwaukee, Wisconsin October 18, 1947. His father rejoined the Air Force as a regular officer from 1950 until his retirement in 1977 when he and his wife Esther moved... View Obituary & Service Information

The family of Jay Alan Abrams created this Life Tributes page to make it easy to share your memories.

Send flowers to the Abrams family.