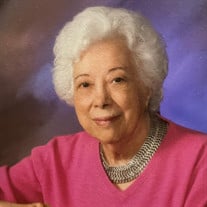 Jean Whiting Addison passed from this life on January 1, 2021 on her own terms and in her own time. Born in 1917, the daughter of Methodist Minister Herbert R. and Ethel M. Whiting, she traveled through her life with grace, dignity and whit. A graduate of Ohio Wesleyan University and member of Pi Beta Phi Fraternity for Women, she then married William B. Addison, Sr. He worked for his father and eventually became the owner of The Addison Tiling Company in Cleveland, Ohio. They enjoyed a summer house on Lake Erie, Red Bird, where all the family voted her the best pie maker in town. Cherry was the all-around favorite, but there were too many delicious flavors to count! After periodic visits to Tucson to be with family and friends, they became enraptured with the open spaces, horses and never-ending stunning sunsets. Bill had ridden his horse over the property and said to Jean, “This is it!”. They designed, built, and decorated their gracious home in the foothills on the east side. From then on during the warm summer sunsets, they would sit on the veranda of their home with a cocktail in hand and welcomed whoever stopped by. Bill and Jean Addison purchased Evergreen Cemetery in 1960, established July 1, 1907, later becoming Evergreen Mortuary and Cemetery. Bill passed in 1993, and Jean continued as owner of the business until the sale in 2014. Jean always supported Bill and her family with advice, strength, and a beautiful smile. As matriarch of the family, Jean utilized her inner intuition and loving guidance in her quiet way. Mother’s hallmark sense of humor, always appreciated, was never at one’s expense. This gentle lady set an example that has become quite scarce these days. She will be greatly missed by all who were fortunate to know and love her. Jean is survived by her three children: Anne (Hoyt) Vandenberg, Jr., William B (Barbara) Addison, Jr., Jeffrey A. Addison; her grandchildren, great grandchildren, and one great-great granddaughter. A private family service will be held at Evergreen Mortuary and Cemetery. Donations can be sent in her honor to The Humane Society of Southern Arizona or the charity of your choice.

Jean Whiting Addison passed from this life on January 1, 2021 on her own terms and in her own time. Born in 1917, the daughter of Methodist Minister Herbert R. and Ethel M. Whiting, she traveled through her life with grace, dignity and whit.... View Obituary & Service Information

The family of Jean Whiting Addison created this Life Tributes page to make it easy to share your memories.

Jean Whiting Addison passed from this life on January 1, 2021...

Send flowers to the Addison family.