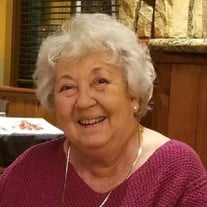 Josefina C. Marshall was an incredible woman who blessed many lives in her 84 years on this Earth. She was born in Mexico City in 1938 to Josefina Castellanos Rodríguez and she, her mother and grandmother Cruz Bórquez moved to Nogales, AZ in the 1940s. They did this with the help of their uncle, then President of Mexico Abelardo L. Rodriguez. Starting out in a new country with a single mom wasn't easy, but she always helped her mom, and even helped her aunt's with babysitting her younger cousins. Josefina excelled in her studies and was Valedictorian of her high school class. Instead of attending College at 18, she went to work to help support her mother and grandmother. Josefina married and had three daughters, Jacqueline in 1961, and twin girls, Roxanne and Rebecca in 1964. While raising three daughters, she became one of the first female United States Customs Agents in all of the United States. She went through a divorce in a time when it was still uncommon, but did so for her girls. Josefina met and married Hugh in 1974 who loved her endlessly and adopted her girls as his own. They raised them together and then also helped raise Roxanne's daughter when she (surprise) became pregnant her senior year of High School with Stephanie. The Marshall home was always the gathering spot for all four girls, their many friends and of course for animals of every kind. Fina was known to be quite the animal whisperer. Fina adopted the girl's friends as her own and loved to cook delicious meals and entertain guests in their home. Eventually Hugh and Fina decided to move from Nogales to Tucson when Stephanie graduated high school. They lived there for almost 20 years, close by to Jackie, her husband Jean Luc, and Jackie's three kids, Sarah, Noah and Luke, and Roxanne and Stephanie. In 2016, Hugh became ill and passed away. After 42 years of marriage, Josefina lost the love of her life and the family lost their father and grandfather. She continued on as the matriarch of the family but having lost one daughter, Rebecca, and her husband, was never the same. Roxanne took care of Josefina after Hugh's death and ultimately stopped working to care for her full-time as her health declined. The family banded together to help care for Josefina and keep her at home. In 2019, Josefina welcomed her first great granddaughter, Cassandra and she was elated to see her often when Roxanne and Josefina moved into a home next door to Stephanie and her husband, Moshe in 2020. The family gathered for holidays, birthdays and visits while staying careful because of COVID. In 2021 and 2022, Josefina's health started to decline further. Her passing in April was devastating, but the family is relieved that she is no longer suffering and is reunited with Becky, Hugh and her cousins that passed before her. Oh and lots and lots of furry friends in heaven with her. Catholic Mass Funeral Services for Josefina C. Marshall will be held: May 13th at 2:00PM St. Peter and Paul Church 1946 E Lee St, Tucson, AZ 85719 Followed by a Christian Burial at Evergreen Cemetery

Josefina C. Marshall was an incredible woman who blessed many lives in her 84 years on this Earth. She was born in Mexico City in 1938 to Josefina Castellanos Rodríguez and she, her mother and grandmother Cruz Bórquez moved to Nogales, AZ... View Obituary & Service Information

The family of Josefina Castellanos Marshall created this Life Tributes page to make it easy to share your memories.

Josefina C. Marshall was an incredible woman who blessed many...

Send flowers to the Marshall family.