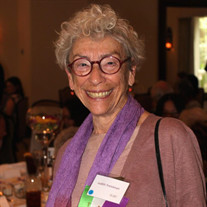 Judith Marie Treistman passed away on Tuesday November 2 at age 88 in Tucson, AZ. Judith was born and raised in Brooklyn, NY. In life, she artfully navigated using her love of storytelling, literature, and words to pursue several successful careers and passions. Judith attended Brooklyn College (class of 1955), where she became politically active and served as a representative to the 4th World Festival of Youth and Students in Bucharest and later to Prague where the International Union of Students was located. Upon returning to the US, Judith completed a master’s degree in Anthropology/East Asian Studies (1958) and a PhD in Anthropology (1966) at Columbia University. While in graduate school, Judith gave birth to her son, Peter, toting him around as she wrote her dissertation. She had a successful academic career as an assistant professor of Anthropology at Cornell University, spending several years abroad in Taiwan looking for prehistoric pottery (with Peter in tow), and as an associate professor at City University of New York Graduate Center, where she helped start the PhD program in Anthropology. At age 45, Judith pivoted, going back to school to earn her MSN in nurse midwifery at Yale University (1979). Returning to New York, she supervised 12 midwifery clinics across Suffolk County and became the chair of the Department of Parent Child Nursing at SUNY Stony Brook. Judith jumped at the opportunity to work with Tuba City Indian Health Service (AZ) as a nurse-midwife, instilling her love of the desert. With a broad range of experiences and stories in hand, Judith moved to Kentucky where she headed the Community Nurse Midwifery Education Program at Frontier School of Midwifery and Family Nursing. Judith was invited to return to SUNY Stony Brook where she created one of the first computer-driven distance learning programs in the country. Judith moved to Tucson, AZ in 1999 where she enjoyed the desert landscape, sunsets, and warm weather. Although retired, she remained actively involved in her local community. Judith served on the boards of directors for the University of Arizona Humanities Seminar Programs, Birth and Women’s Health Center, and El Rio Health Center Foundation, and volunteered regularly for the Rogue Theater. She was passionate about theater, music, and travel, and cared deeply about public health and improving the lives of women and girls. Judith is preceded in death by her son, Peter Treistman (33), and is survived by her cousins, Mary Sabel, Jean Le Bec, and Jon Korechoff and his wife Diana Freid, her beloved granddaughter, Lyda Harris, and a community of strong women. A celebration of life is scheduled for 3pm on December 23nd, 2021 at Agua Caliente park Tucson, AZ. In lieu of flowers or gifts, please send a donation in memory of Judith Treistman to the Community Foundation for Southern Arizona, 5049 E. Broadway Blvd., Suite 201 Tucson, AZ 85711, cfsaz.org.

Judith Marie Treistman passed away on Tuesday November 2 at age 88 in Tucson, AZ. Judith was born and raised in Brooklyn, NY. In life, she artfully navigated using her love of storytelling, literature, and words to pursue several successful... View Obituary & Service Information

The family of Judith Marie Treistman created this Life Tributes page to make it easy to share your memories.

Judith Marie Treistman passed away on Tuesday November 2 at age...

Send flowers to the Treistman family.