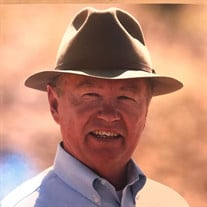 Kenneth Dale Forbes May 8, 1944 – October 29, 2020 Kenneth Dale Forbes, 76, passed unexpectedly on October 29, 2020, from a coronary embolism. Born to Lilah and Carl Forbes on May 8, 1944, in Cheyenne Wyoming, Ken was a thoughtful and responsible person from the very start. He grew up in Fort Collins, Colorado. His father served in the Air Force, and the family lived in Japan beginning at age 12. During that time, Ken taught himself Japanese. The ability to adapt and lead are traits he carried throughout his life. Ken excelled in High School and earned a football scholarship to Baker University in Kansas, where he was a member of the Kappa Sigma Fraternity. During that time, his parents retired to Tucson, Arizona. On a Christmas visit, he fell in love with the area and transferred to the University of Arizona. Ken graduated with a bachelor's degree in Political Science. He later earned two additional degrees in Business and Accounting. Ken married his one true love, Fredette Holbrook, on April 22, 1967. Both said it was love at first sight, and they enjoyed 53 years of blissful marriage. Their first son, Scott, was born in 1968; Brian was born in 1972, and their family was complete. Ken was a dedicated father and family man, active in his sons' lives, encouraging a love of education and sports. The family enjoyed football, baseball, basketball, skiing, and cycling. In 1967, Ken joined the Navy, entering the Naval Officer Training and Flight School program in Pensacola, Florida, to serve his Country during a time of war. Ken completed two tours in Vietnam as a naval aviator, flying with VF-154, The Black Knights Squadron, a Top Gun designation. He flew F4s off the USS Ranger, notching over 400 combat missions during his tenure. Upon returning from the war, he was assigned at the Naval Missile Center in Camarillo, Ca. and was one of the first Naval Aviators to fly the new F14. After serving his Country valiantly, he left the Navy in 1974 to join Hughes Aircraft, where he worked as the Liaison between Hughes' Missile Project Weapons System and the Navy. Ken realized a lifelong dream when he purchased two Arabian horses. That endeavor grew into Ishtar Arabians, an Arabian horse farm in Tucson, Arizona. They boarded horses, owned several of their own, and offered training and riding lessons in the community. In 1978, The family, along with the horse farm, moved to Berthoud, Colorado, where they lived until 1983 when they returned to Tucson. Ken entered the insurance industry after accepting a position at Fireman's Fund in 1983. He quickly moved up in the organization, becoming a manager of the Tucson Claim's Office. In 1989, Ken and Fredette bought Frontier Adjusters in Kingman, Arizona. They owned and operated the successful business for ten years before selling it and returning to Tucson. Ken spent the last years of his career at Scottsdale Insurance managing excess lines and eventually becoming a claims auditor. He retired in 2016 at age 72. In 1993, he got into cycling with his sons and soon became entrenched in the sport as a cyclist and race officiant. He supported Scott's bicycle shops and Brian's career as a professional racing cyclist. He managed pro cycling teams and was a United States Cycling Federation (USCF) official. He was well-known and respected in the sport and traveled throughout the Country officiating races from 1997 to 2012. Ken Forbes was a man to love and respect. Dedicated to his family and always available to lend a helping hand to those near and dear to him. He was a giving person who followed the rules and lived by the book, though that didn't stop him from having many adventures throughout his life. Ken is preceded in death by his parents, Lilah and Carl Forbes, parents-in-law, Ruth and Frederick Holbrook, and grandson, Kenny Forbes. He is survived by his beloved wife Fredette Forbes, children Scott and Brian; daughter-in-law, Janice; nine grandchildren Brittanie, Sydney, Brooklynn, Adin, Sarah, Alyssa, Liam, Lake, and Leif; three great-grandchildren Cayleb, Stanley, and Alan. Kenneth Forbes, beloved husband, father, grandfather, and great-grandfather will be forever missed and profoundly loved. A memorial service with military honors will be held on December 2, 2020, at Sierra Vista Veteran's Memorial Cemetery in Sierra Vista, Arizona.

The family of Kenneth Dale Forbes created this Life Tributes page to make it easy to share your memories.

Send flowers to the Forbes family.