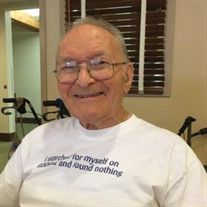 In no specific order, Lee Chutkow loved classical music, Shakespeare’s writings, Shabbat morning services, and chocolate ice cream. His smile warmed every heart and his wit never dimmed even as he struggled with memory issues. His life created happiness felt by family, friends and community, and he never lost faith in Hillary Clinton even after she was defeated in 2016. Lee was born in Denver, Colorado to Sam and Yvette Chutkow. He was raised alongside his two brothers Arnold of blessed memory and Jerry. While Lee was born and raised in Denver, Colorado, he lived in many places — Kentucky, Illinois, New Jersey, New Mexico and, for the past nineteen years, Arizona. During World War II, he served in the Navy Reserve. After completing his service, he studied at the University of Chicago where he received his bachelor's degree in philosophy, the University of Colorado in Denver where he received his medical degree, and the University of Rochester / Strong Hospital where he did his psychiatric internship. He spent the entirety of his career helping those struggling with mental health challenges. His career included time as the medical director of Kentucky’s Central State Psychiatric Hospital. In 1983, he received the Humanitarian Award at the 60th Anniversary Celebration of Amit Women by the Louisville Chapter. According to a Jewish Journal article, he was given this award for “his compassionate involvement in the field of mental health for 26 years.” Over the years, he was involved in many organizations. He was an active and award winning member of Toastmasters. He was an officer of Physicians for Social Responsibility, an organization devoted to the eradication of nuclear weapons and world peace. And, he served as president of Chesed Friends in the mid-80’s, the male affiliate of AMIT Women. His hobbies included singing in synagogue choirs, reading poetry and literature, attending classical musical concerts and live theater, listening to his CD music collection, and attending services and events at his synagogue. He exercised over the entire course of his life enjoying frequent walks as he aged. He was the father and stepfather to three children -- John Chutkow of blessed memory, Jennifer Baldwin married to Hillel Baldwin, and Jon Hanish married to Lisa Hanish -- and the grandfather to two grandchildren -- Lila and Sydney Hanish. He had three marriages, the first to Mary Lou Murdoch, the second to Betty Hanish of blessed memory, and the last to Theodora Ladnya of blessed memory. While he had many pets over the course of his life, Penny was his final beloved canine companion. She was by his side 14 years and always brought a smile to his face and the faces of residents and professional staff at his retirement community. On November 30th, he passed peacefully while listening to classical music as his daughter Jenny read him poetry. To ensure the health and safety of our community, we are following all guidelines set by local, state and CDC officials.

The family of Dr. Lee Robinson Chutkow created this Life Tributes page to make it easy to share your memories.

Send flowers to the Chutkow family.