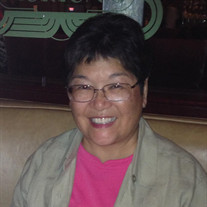 Linda Gee passed away unexpectedly on December 3, 2019 at the age of 67. She was born Linda Faye Hom in Phoenix, Arizona, to parents Jack and Wanda Hom. Linda grew up in Mesa, Arizona and had two brothers and three sisters. She graduated from Westwood High School and then moved to Tucson to attend The University of Arizona. While attending The U Of A, Linda met her life partner and husband Richard, earned her Bachelor’s Degree in 3.5 years and then began her family and career. Linda worked 26 years at The U Of A until her retirement. During this time, she earned a Master’s Degree from Northern Arizona University. She also worked at the Bottle Shop with Richard and was co-owner of the establishment. Linda was preceded in death by her parents and older brother. She is survived by her husband Richard Gee, daughter Lisa Gee-Gray, son in law Anthony Gray and four grandchildren Anthony J., Jackson, Taylor and Emelia. She is also survived by her three sisters, one brother, several Aunts, Uncles, Cousins and numerous Nieces and Nephews. Many people have hobbies, but for Linda, she loved to travel, play tennis, and bowl. She participated in weekly tennis lessons, clinics, and played on many local USTA tennis league teams including mixed doubles with her son in law. With a group of close friends she participated annually in National bowling tournaments across the country. Every quarter she would travel to Las Vegas with her sisters so they could take a break from reality. Linda loved to watch movies and repeat lines from some of them. They were usually lighthearted Comedies or Musicals. She had a knack for making people laugh, smile, feel at ease and have a good time. Family was most important in Linda’s life, especially her grandchildren. She attended all of their performances, sporting events, and vacationed with them as much as possible. Linda will be greatly missed and her kindness to others never forgotten. Memorial services will be held on Saturday, December 21, 2019 at 10:00 AM at the Tucson Chinese Cultural Center, 1288 W River Road, Tucson, AZ 85704. Phone number 520-292-6900. In lieu of flowers, the family would like donations made to the Tucson Chinese Cultural Center.

Linda Gee passed away unexpectedly on December 3, 2019 at the age of 67. She was born Linda Faye Hom in Phoenix, Arizona, to parents Jack and Wanda Hom. Linda grew up in Mesa, Arizona and had two brothers and three sisters. She graduated... View Obituary & Service Information

The family of Linda Gee created this Life Tributes page to make it easy to share your memories.

Linda Gee passed away unexpectedly on December 3, 2019 at the...

Send flowers to the Gee family.