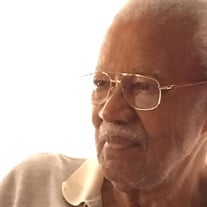 Louis Parchment 1932 - 2022 Louis Parchment passed away peacefully in his sleep with family at his side. He was 89 years of age and a 26-year United States Air Force veteran. Louis was born and raised in Panama. He and his family moved to New York where he worked and attended college. He then joined the US Air Force where he worked in medical supply and served military communities globally. Years later, Louis cross-trained and became a computer systems analyst. He continued this work through his retirement from the military and for several years afterward. He was stationed in England where he met the Spanish woman who would become his wife. They were transferred back to the US where their three children were born. The whole family had the privilege of being stationed in Turkey, Germany, and Spain before returning to the US and living in Oklahoma, Alabama, California and Arizona. While in Germany, Louis made a quick trip back to the States to become an American citizen. Louis had an avid curiosity of other cultures, loved to travel, and considered himself a citizen of the world. He and his wife, Sa, preferred to live off-base when stationed overseas in order to more fully experience and understand the culture of the host country. After retirement, Louis and Sa continued to travel the world, visiting family in New York and Spain, and the life-long friends they had made while in the military. Louis practiced yoga before it was fashionable. He was a talented artist, an avid reader, loved to draw, to dance, to photograph events in his life, and loved music of all kinds. He sang the Calypso songs he grew up with to his wife and children during road trips in Europe and the United States. Louis is remembered by family and friends as a man of quiet dignity and resilience, and also as a kind-hearted and gentle man, generous of spirit, and quick to laughter. His light touched many communities both here and abroad and his presence will be sorely missed. He was a friend to all who met him -- to know him was to love him. He is survived by his beloved wife of 59 years, Sa; his treasured children, son Jaime and daughters Virginia and Lydia, and son-in-love Cid; his dear cousin and best friend Ricky and his partner Linda; his loved cousins Ricardo, Carlos, and Wilfredo; and the daughters of his heart Ayesha and Myriam; as well as many friends and neighbors who loved him dearly as he did them. For all their superb care and loving kindness to Louis and his family, we would like to thank all of the medical staff, therapists, and personnel at the VA Hospital, as well as the good people at the Northwest Fire Department; and all of the health aides, nurses, and therapists who came to the house and brightened Louis' day with laughter and hugs. We appreciate you all. The memorial service will be Saturday, February 12, 1:00 until 4:00 PM at the Evergreen Mortuary and Cemetery, 3015 N. Oracle Road, Tucson, AZ 85705.

Louis Parchment 1932 - 2022 Louis Parchment passed away peacefully in his sleep with family at his side. He was 89 years of age and a 26-year United States Air Force veteran. Louis was born and raised in Panama. He and his family moved to... View Obituary & Service Information

The family of Louis Parchment created this Life Tributes page to make it easy to share your memories.

Send flowers to the Parchment family.