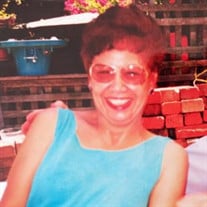 Lucinda Arvizu Biller passed away on June 20, 2021. Born in Cananea, Mexico, on March 23, 1944, she was 10 months old when her family immigrated to the U.S. and settled in Tucson, Arizona. Her father, Rafael Arvizu, eventually built a house on South 14th Avenue, making the adobe bricks himself. Lucinda often recounted the story of playing in the mud of those bricks as her father made them. She attended C. E. Rose Elementary and Wakefield Middle School and graduated in 1962 from Pueblo High School. She became a naturalized U.S. citizen in 1960. The next year – her junior year in high school - she became the first Pueblo High School student to be an exchange student. She was sponsored by the American Field Service and represented Pueblo High School in its “Americans Abroad” program, spending a summer in Herisau, Switzerland. Her sisters say that the experience unleashed in her a lifelong love of travel, exploration, and interest in people of all backgrounds. In 1966, she graduated from the University of Arizona with a Bachelor of Arts degree in Spanish and English Literature, and spent the next few years working in Washington, D.C. with the Civil Rights Commission, and then as a legal secretary in Detroit, Michigan. She began graduate studies at the U of A in 1968, and some months later, her professor referred her to the Stanford Library to complete some of the required research. Once in the Palo Alto area, she started working full time at Ampex International as an interpreter for their Latin America unit. It was at Ampex that she met her husband, Achim W. H. Biller. It was fitting that she connected with him - after all, he had come to the US from Germany seven years before. Like her, he was not a born and bred “American”; like her, English was his second language. They wed in Tucson, in October of 1969, and then moved to Burlingame, California, where they raised their four children. Lucinda was a dedicated mother, teacher, volunteer, and friend who gave generously of her time and talent. She was active in the PTA for each of her children; by the time her youngest, Miria, was a kindergartner, she had been an active PTA member for over a decade. She was also a board member at The German School of the Mid-Peninsula, worked as a Spanish teacher at St. Catherine’s and St. Dunstan’s schools in Burlingame and Millbrae, and was a founding member of the Latina Mentor Program at Mills High School in Millbrae. She also volunteered with the San Mateo County Meals-on-Wheels program, incorporating food deliveries into her family’s daily schedule. At home, her table always had room for one more, and friends old and new would invariably thank her as they left, saying they now understood what Mexican food really was. She would regularly prepare more than enough and had to-go containers ready at all times - whether for people to take home or to deliver to whoever might have called. People often said they could taste the love in her dishes, Mexican or not! Lucinda’s Christian faith underpinned everything she did, and she delighted in being one of God’s children. But she also took her Christian responsibility and mission seriously. In Burlingame, she found her faith family at the Burlingame United Methodist Church. She taught Sunday school and through her work with the United Methodist Women, contributed to fundraisers to support scholarships and other programs to enrich the lives of her church family and beyond. She especially appreciated the musical heritage of the church and worked tirelessly to support the church’s music department. Her children remember going to church to help with the UMW’s many projects, and relished helping make the gingerbread cookies and sugar Easter eggs. Lucinda and Achim moved to Tucson following Achim’s retirement in 2008. In Tucson, she rejoined the Menlo Park Methodist Church, the very church she had attended as a child, and was especially happy to reconnect with some of her dearest childhood friends there. Lucinda was 49 years old when she suffered a stroke. Characteristically, she was determined to rehabilitate her sight and spatial awareness, and she was able to be a very present grandmother to her first grandchildren, Heidi’s daughters. In the intervening years, she enjoyed traveling and spending time with her children and their growing families. She was diagnosed with Alzheimer’s in 2019 and a year later with multiple myeloma. In spite of the health challenges and setbacks she suffered, her vibrant presence and fierce love for her family never wavered. She is survived by her husband, Achim W.H. Biller, her four children Belynda (Britt Talbert, Commander, USN ret.), Heidi (Greg Wolcott, Ed.D.), LTC Achim Miguel Biller (US Army), and Miria (Dr. Benjamin Hendrickson), and her seven granddaughters, Carolina Talbert, Lucinda Wolcott, Evita Wolcott, Lea Wolcott, Eva Hendrickson, Marisabela Hendrickson, and Azucena Hendrickson; as well as her sisters Estella Arvizu Peralta, Rosela Arvizu, and her brother, Rafael Arvizu; and her many nieces, nephews, and grand-nieces and -nephews, each of whom she loved dearly. We are so thankful for her legacy of charity, faith, hope, and love. In lieu of flowers, her husband and family have requested that donations be made to the Menlo Park Methodist Church in Tucson, Arizona at https://menloparkumc.org/, the Leukemia and Lymphoma Society at https://givenow.lls.org/, or the Alzheimer’s Association – Desert Southwest Chapter at https://www.alz.org/dsw?set=1.

Lucinda Arvizu Biller passed away on June 20, 2021. Born in Cananea, Mexico, on March 23, 1944, she was 10 months old when her family immigrated to the U.S. and settled in Tucson, Arizona. Her father, Rafael Arvizu, eventually built a house... View Obituary & Service Information

The family of Lucinda “Cindy” Arvizu Biller created this Life Tributes page to make it easy to share your memories.

Send flowers to the Biller family.