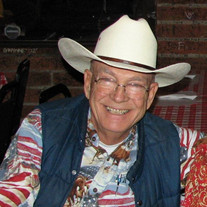 Jim Barber, 84, passed from this earth that he loved so much to a place that he knew would be even more beautiful on July 25, 2020, finally taken from us by the ravages of COPD and Alzheimer&#8217;s. He was many things, but above all he... View Obituary & Service Information

The family of Major "Jim" Barber created this Life Tributes page to make it easy to share your memories.

Jim Barber, 84, passed from this earth that he loved so much...

Send flowers to the Barber family.