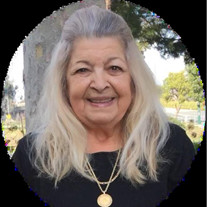 Marie Mariem Lorenz, 91, of Rabat French Morocco, passed away in Alameda California on November 14, 2021, with her daughter Donna by her side. Marie is predeceased her by her parents,Eliaou and Aissa Sellem , ex husband Harlan Miller, and her husband Jess Lorenz. Marie is survived by her bother Raphael Achour , her three children, Sandy, Oliver, and Donna, her sevengrandchildren, Sharon, Brian, Jessica, Ethan Oliver, Michelle, Chloe, and Benjamin, and her four great grandchildren Autumn, Jordan, Olivia, and Benjamin. Marie met and married Harlan Miller, divorced, and later married Jess Lorenz an US Air Force enlistee. During his enlistment, together they traveled the world and resided at duty stations in Japan, Germany, and Spain. While living in Seville Spain, during the Six Day War between Israel and Egypt, Marie traveled to Morocco to bring her family out of Rabat Morocco to Seville Spain, and then helped them to relocate to France. After retirement from the Air Force, they continued to live in places such as West Hollywood, Simi Valley, Alameda, Richmond, Oakland, Emeryville California, Israel, and Tucson Arizona. After her husband of 45 years passed in Tucson, she eventually settled in Alameda California. While Marie had a limited education, that did stop her from learning five languages, owning a business, and becoming the head tailor at Wilkes Bashford, a high end men’s clothing store in San Francisco. Marie was devout in her Jewish faith and belonged to Temple Beth Abraham where she made friends and gained solace from attending services there. Her family and friends will miss her deeply. In lieu of flowers, a donation can be made in Marie's name to the Wounded Warriors Project

Marie Mariem Lorenz, 91, of Rabat French Morocco, passed away in Alameda California on November 14, 2021, with her daughter Donna by her side. Marie is predeceased her by her parents,Eliaou and Aissa Sellem , ex husband Harlan Miller, and her... View Obituary & Service Information

The family of Marie Mariem Lorenz created this Life Tributes page to make it easy to share your memories.