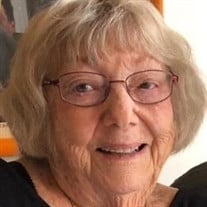 Marsha passed away April 27, 2022, Marsha Hope Solomon was born in Seattle, Washington to Hattie and Joseph Solomon. Her middle name was given as a sentiment of optimism, a ray of "hope," through the depression era. Her childhood circumstances were sometimes difficult, but she was always showered in love by her older brothers, Orley and Paul. In turn, she became a fountain of love for others throughout her life. Marsha attended the University of Washington in Seattle where she met her husband Sidney Hirsh. They married and moved to Tucson, and Sid joined in the family business, Hirsh's Shoes. Meanwhile, Marsha focused on raising three children in the most loving way. She was actively involved in school, scouts and supporting her family. Her home was always filled with food and laughter, opening her door to a growing community of family and friends, a hospitality queen. When her children left home in the 1980's, she had more time to develop her interests including art, literature, continuing education, and becoming an entrepreneur. She opened a specialty children's clothing store—Grandma's Treasures—with her good friend and neighbor Marian. Many customers became life-long friends. Marsha was highly creative and appreciated art, beauty and the wonders of nature. With her sister-in-law, Joan she hosted a community "Art Scene", setting up tours and talks at various local art studios. Marsha's greatest passion was painting. She studied with her beloved art teacher Cynthia and maintained involvement with an art community throughout the years. Her colorful and fanciful watercolors have delighted her many friends and family. Last year after Sid's passing, Marsha moved to Pacific Grove, CA to be near her daughter and family. She soaked up the surrounding coastal beauty. She joined a writing class, and found a love of memoir and storytelling. With her sweet smile and loving presence, she was adored by everyone, everywhere. Marsha is preceded in death by her daughter Leslie, and her husband of 68 years Sidney. She is survived by son Alan (Sally), daughter Jennifer (Ed), son-in-law John, grandchildren Michael, Joey, Ariana, Austin, great grandson Ryder, sister- and brother-in-laws, dearest cousins, nieces, nephews and all her "darling hearts." A funeral service will be held on Wednesday, May 4, at 10AM at the Evergreen Mortuary Chapel, 3015 N Oracle Rd in Tucson

Marsha passed away April 27, 2022, Marsha Hope Solomon was born in Seattle, Washington to Hattie and Joseph Solomon. Her middle name was given as a sentiment of optimism, a ray of "hope," through the depression era. Her childhood circumstances... View Obituary & Service Information

The family of Marsha S. Hirsh created this Life Tributes page to make it easy to share your memories.

Send flowers to the Hirsh family.