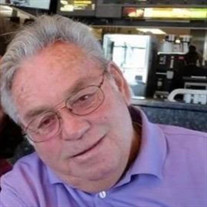 Maynard (Glenn) Cecil Belote Born June 25,1946 was called to be with the Lord March 25,2020. Maynard was Born to Ernest Costello Belote and Alice May Drake in Washington D.C. Maynard got his Nickname Glenn from his step father, Glenn Chandler. He rescued him at the age of five from the back of an ice cream truck. Glenn’s Mother Alice fell in Love with Glenn Chandler and they married shortly after and raised her family with him. Glenn’s Step father was a Master Sargent in the Air Force they lived in Morocco, Peru, Spain, and Africa. Glenn Joined the US Army on April 13, 1967 and served in the Vietnam war, as a Sharpshooter and a Marksman. April 11, 1969, he had an Honorable Discharge. Glenn met Rosemary Ann Rodriquez in 1969. They married shortly after on December 20th, 1969. They raised 3 daughters Susan, Jaqueline and Kimberly. Glenn and Rosemary raised their family in Ajo, Arizona Where he worked for Kord’s Ambulance Service as a Paramedic and also ran Douglas Funeral home. While living in Ajo Glenn and his family attended First Southern Baptist Church. He volunteered as a school bus driver for the Church. Glenn and Rosemary moved their family back to Tucson, Arizona in 1984. He and his family attended Del Norte Baptist Church and later on joined Casas Church. Glenn worked for the Department of Corrections as a Coordinator of Discipline at the Florence State Prison. He then moved on to become a Lieutenant at the Aleta Law enforcement Training Academy in Tucson. Following the Academy, he then retired as the Lieutenant at the Catalina Juvenile Detention Center. After retirement, Glenn could not keep still and stepped into the Auto sales industry with Chapman Honda, Budget Cars and Jim Click Ford. After the second retirement, Glenn spent his final years at home with his 6 grandchildren Justin Vario (Austin Vario), Kyla Rose- Vario (Tyler Rose), Bailey Tryk and Brennan Tryk and his 2 great grandchildren Keegan Vario and Nolan Rose. He enjoyed traveling with his family to baseball games and tournaments and taking trips to San Diego, California where he loved to spend time on the beach. He loved the University of Arizona Basketball team and Football Team. He loved going to the games with his family. When he became sick and wasn’t able to go to the games he wouldn’t miss a game on T.V. He also loved motorcycles and his Harley Davidson. He loved to ride up to Mt. Lemon on the weekends and take in the fresh air. Glenn will always be remembered by his loving heart. He was changing people’s lives with either his own family or complete strangers that he would meet along the way. He would always take the time to pay a compliment to strangers letting them know that they are seen and their hard work did not go unnoticed. Nobody loved his family more than he did. He was not only proud of his wife and daughters but of his grandchildren as well. He taught us all to love and to put Jesus first and then to make your family your number one priority. Glenn was one of a kind and the love that he gave was unmatched. Glenn is survived by his Wife, Rosemary, his children Susan (Bill), Jaqueline (Mike), Kimberly (Ryan) and his grandchildren Justin (Austin), Kyla (Tyler) Bailey and Brennan and his great grandchildren Keegan and Nolan. Glenn was also survived by his close Nieces and Nephews. He is also survived by his sister-in-law Irene Sanchez and Brother-in-laws Richard Rodriquez, Adolf Rodriquez and Jim Cevetan. Glenn is proceeded in death by his Father Glenn Chandler, His Mother Alice Chandler, his In-Laws, Manuel and Connie Rodriquez his sisters Penny Cevetan, Wally Allen and Dory Lester. His Nephews James Cevetan, Troy Boss and Son-in-law Frank Vario. Due to the Covid-19 Virus Memorial will be on hold until further notice.

Maynard (Glenn) Cecil Belote Born June 25,1946 was called to be with the Lord March 25,2020. Maynard was Born to Ernest Costello Belote and Alice May Drake in Washington D.C. Maynard got his Nickname Glenn from his step father, Glenn Chandler.... View Obituary & Service Information

The family of Maynard Cecil Belote created this Life Tributes page to make it easy to share your memories.

Send flowers to the Belote family.