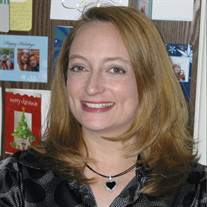 Melissa Gail Suba Obituary On Christmas Eve, December 24, 2021, Melissa Gail Suba, loving wife, daughter and dear friend, passed away at the age of 48. She had been diagnosed with Metastatic Breast Cancer in August 01, 2014 and unfortunately succumbed to the illness while in Hospice care at Peppi's House in Tucson, Arizona. Melissa was born on February 28, 1973 in Smithtown, New York in Suffolk County to Steven and Carolyn Asnen. She received her Associate In Arts degree at Suffolk County Community College in 1993, her Bachelors in Liberal Arts degree at The College at Brockport, State University of New York in 1995, and later she received her Masters of Business Administration degree at Jones International University in 2012. Melissa had a passion for helping people. This led to a fulfilling career working as a teacher at Temple Emanu-El and as a Charter High School teacher. She was equally devoted in her role as an Office Manager and Benefits Coordinator for Pacific Dental Services all while living in Tucson, Arizona for the past twenty-three years. On October 11, 2012, Melissa married Dr. James D. Suba, D.C. in an outdoor ceremony in Sedona, Arizona; one of the many places they frequently visited. Melissa and James regularly enjoyed visiting historic sites in Santa Fe, New Mexico, riding Segways in the streets of San Francisco, visiting James’ old neighborhood in San Diego and spending Melissa’s 40th birthday at Disneyland and California Adventure. Melissa enjoyed playing Sudoko while watching Grey’s Anatomy, Top Chef, Hell’s Kitchen and various Disney movies. She enjoyed planting flowers in the spring and feeding her desert tortoise “Henry” romaine lettuce and strawberries. Family was very important to Melissa and she loved every opportunity to visit and spend time with her's and her husband's family. She was loved by everyone and was known for her positive vibrant energy and radiant smile. Melissa brightened up everywhere she went. She inspired her staff at work to exceed goals and did everything she could to help in anyway possible. Melissa loved organizing holiday parties at work and made the events special for everyone. She additionally organized charity drives at one of her Pacific Dental offices, which led to her becoming the “Our Family Services” Charity's "2018 Volunteer of the Year.” Melissa was preceded in death by her mother Carolyn and her grandparents. She is survived by her husband James, her father Steven, her step-mother Judy, her brothers Neil and Paul, her sister-in-law Danielle, her nephews Jeremy and Grant as well as her many aunts, uncles and cousins. Jewish services were held at Evergreen Mortuary for Melissa shortly after her passing in accordance with her wishes. The services were broadcast via Zoom and a recording is available on this website. For those wishing to honor Melissa, a charitable donation to the "Our Family Services" Charity in Tucson, Arizona or any charity honoring breast cancer patients may be made on her behalf

Melissa Gail Suba Obituary On Christmas Eve, December 24, 2021, Melissa Gail Suba, loving wife, daughter and dear friend, passed away at the age of 48. She had been diagnosed with Metastatic Breast Cancer in August 01, 2014 and unfortunately... View Obituary & Service Information

The family of Melissa G Suba created this Life Tributes page to make it easy to share your memories.

Send flowers to the Suba family.