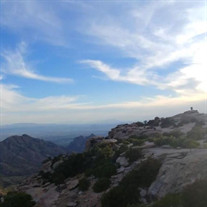 Mel Bucholz, born June 14, 1940, beloved husband of Michelle Davidson, treasured father of Malissa Comerford and Kristin Linehan, died peacefully on Sunday morning, June 6th (D-Day) at his home, after loving care from his family and the Casa de la Luz hospice team. His family believes that Mel chose D-Day because he was an avid history buff, especially interested in WWII and greatly admired the career of his Uncle, Ret. Col. John Calvin Holley, who served in WWII, Vietnam and Korea and was previously a squadron leader at Davis Monthan AFB in Tucson. In addition to Mel's wife Michelle and daughters Malissa (Alwin Church) and Kristin, he is survived by his amazing Aunt Vernetta (100!) and his totally cool Aunt Judy (95!) and many much loved cousins, Sandra Reilly first among them, as well as Michelle's daughter Jacqui and son Mark (Shelly) and her six grandchildren, all of whom greatly loved Mel. Mel was able to celebrate the arrival of Michelle’s great-grandson on April 30th. He is also survived by his first wife, Margaret, who was, and is, a wonderful mother to their daughters Malissa and Kristin. Mel was predeceased by his mother Romona Holley, father Lee, Aunt Catherine and Uncles Ralph, Georgie, Charlie and John Calvin, dear cousin Gus and his friend and mentor Jim Potter. Mel spent more than 45 years in the film industry in Los Angeles. In his 30 years at MGM Studios, he worked in the highly regarded MGM Laboratory, in positions ranging from negative assembly to customer service, which he loved, working with directors like Sydney Furie and D.P.s like Robbie Greenburg. After MGM Labs closed, Mel spent a brief time at Paramount Pictures where he assisted in the preparation for the opening of Paramount's state of the art Film Archive building. From Paramount, Mel went to work at a subsidiary of the IMAX Corporation in Culver City, where again, with his deep knowledge and expertise in the industry and his ability to manage people and take on challenging projects, he managed the post production facility for the owners in Canada. From there, he moved to Santa Monica to IMAX's large new facility to become the print distribution manager, in charge of seeing that the 70mm large format prints were sent to theaters all over the world. Mel greatly respected and cared for his colleagues from his years in the film industry, particularly his long time friends going back to MGM days up through retirement, Dale Spence, and Ralph Miliken, his "brother from another mother". Also important were golfing friend Ron Wengler and dear friend Tim Knapp whom he met when Tim was a rep for Eastman Kodak and assigned to the IMAX account. Lunches at Mauro's Cafe on Melrose with Dominic, Tim, Ralph and Mel were legendary. It was difficult for Mel, born in East L.A. and raised in Westchester, to leave family and friends in California, especially great friends and tennis buddies, Sherry and Christine. When he and Michelle retired to Tucson in 2008, he soon grew to love the Sonoran desert and made many good friends here: Brad & Rebecca, Christina and Brian, and Cindy and Dan shared more laughs with Mel and Michelle than can be imagined and sometimes tears when life became difficult for anyone in the group. He loved his racquetball partners at "the J," especially dear friend Lou Barsky and the indefatigable Penny Moreno. Adding to Mel's enjoyment of Tucson were the many friends from Michelle's time as docent at the Tucson Museum of Art who welcomed Mel into their homes or enjoyed dining out together sharing good food, stimulating conversation and happy times. Mel had a great sense of humor and was always ready with a quick retort, but he was also the kindest of men, and had, under a sometimes gruff exterior, a deep and gentle soul. He lived more than 80 years but for those of us who loved him, he left us much too soon. He will always be remembered. Mel's services are to be held at St. Alban's Episcopal Church on Sabino Canyon Road, at 2 o'clock PM on Friday, June 18th, 2021. His urn will be placed in a glass fronted niche at Evergreen Cemetery in a private ceremony on Monday, June 21, 2021. In lieu of flowers, donation can be made to Tu Nidito (Tucson) or Community Food Bank of Southern Arizona.

The family of Melvin Lee Bucholz created this Life Tributes page to make it easy to share your memories.

Send flowers to the Bucholz family.