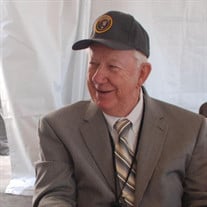 Patrick Thomas (PT) Mahoney died on Monday, 28 Mar 2022, at the age of 92, in Tucson, Arizona. He was preceded in death by his wife Anna Marie Mahoney (maiden name Olson). He is survived by his three sons, Steve (Yanny), Mike (Rita), Pat (Patricia), and their families including 8 grandchildren and 7 great grandchildren. Pat (Poose as those from Telluride knew him) was born in Telluride, Colorado, 1 July, 1929. He was the youngest of 6 brothers who preceded him in death. His parents, Tom and Freda Mahoney are buried in Telluride, Colorado where Pat was raised. Poose started work as a miner in the Telluride mine in his early teens, subsequently in his early twenties he was a deputy sheriff for Telluride, then served in the Army during the Korean War in both Military Police and Military Intelligence. After returning from Korea, he married his wife, Anna. They moved to San Francisco where he started working as a welder on nuclear submarines. He later started working for the Federal Bureau of Prisons, initially as a guard and later as boat pilot for Alcatraz Federal Penitentiary. Pat and Anna’s three sons were all born on Alcatraz Island. After Alcatraz closed, they transferred to Marion Illinois Federal Prison. After a few years in Illinois, they wanted to get back to California, so he found a role running maintenance at the prison in Lompoc, California. At this prison, several famous Watergate figures worked for him, including Haldeman, Chapin and Segretti. He worked at the Lompoc California Federal prison until he retired in 1979. Later, he and Anna purchased the Jet Action West laundromat in Lompoc, which he owned and operated with his long-time employee and friend Ron Boisse until 2018. After an accident in 2017, he moved to an assisted living facility in Tucson, Az (near his son Steve) where he remained until his death. The thing he was most proud of was his three sons, who served and retired as Army officers. Vacations were usually with one of his sons, along with his very close personal friend, Darla Bycott who he traveled with around the world on many cruises and trips. Patrick remained close with Alcatraz serving as Vice President for Alcatraz Alumni Association for many years. He is known as the “Voice of Alcatraz”, as narrator for the Alcatraz Tour. To this day, if you take the tour, you will hear his rough, gravely, voice add flair to the tour. Pat and his son Steve were authors of his book “Assignment Alcatraz”. He enjoyed many trips to the Island signing books and recharging memories. Patrick remained close with many via calls and visits, until his final days. A visit from lifelong friend Jerry O’Rourke within a month of passing meant a lot to him. Pat (Poose) will be remembered as a loving spouse, dedicated father, and good friend to many. Always a direct person, he loved arguing politics with both friends and strangers. Patrick was a hard worker and loyal friend. He will be missed.

Patrick Thomas (PT) Mahoney died on Monday, 28 Mar 2022, at the age of 92, in Tucson, Arizona. He was preceded in death by his wife Anna Marie Mahoney (maiden name Olson). He is survived by his three sons, Steve (Yanny), Mike (Rita), Pat (Patricia),... View Obituary & Service Information

The family of Patrick Mahoney created this Life Tributes page to make it easy to share your memories.

Send flowers to the Mahoney family.