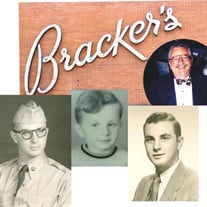 Paul Bracker, passed away peacefully in his sleep this last Saturday at the age of 85. He was a kind, friendly and very generous person, who always made people feel welcome. He was intelligent, respectful, and a gentleman. As one friend put it, a “True Caballero” The passing of an era. Back in the heyday it was not unusual to run into Paul B. Bracker at the Chamber of Commerce in the morning, at a Rotary Club meeting at noon, followed by a session of the Nogales school board in the evening where he sat among its directors. Greet him at Safeway and you were likely to get an editorial earful about anything ranging from the state of the Mexican produce industry, immigration and international trade to shenanigans by city or county governments. More recently, health issues took their toll until finally, on Saturday May 22, 2021, Bracker, 85, died peacefully in his sleep at his home in Tucson, surrounded by his daughter, son, and daughter-in-law. He was the remaining son of pioneer Nogales merchants, Charles and Pearl Bracker, who came to Nogales where they acquired the Army Store in 1924. Paul, the fifth of five children, was born Aug. 6, 1935. He was proud to be the “baby” of the family and remained young in spirit throughout his life. Paul was the last, among his older brothers and cousins who owned and managed retail businesses originally on Morley Avenue and later on Mariposa Road as well, Like his brothers, he felt it was important to not only work in the business and support his family, but to give back to the community. Throughout their working lives they spent many hours, in between and after their duties and obligations to the business, serving on the school board, city council, Arizona Department of Transportation, Arizona Judicial Review Board, and bank boards. They helped causes in Nogales, Sonora such as the Maria Conchita Orphanage, and always seemed to be raising money for one charity or another. Like his brothers, Paul was a member of service clubs that supported many causes. He was a 50-year Rotarian and served as president. He also served as president of the Nogales Santa Cruz County Chamber of Commerce. After graduating high school as valedictorian in 1953 he studied in UCLA for 4 years and received a bachelor’s in business. He then served in the U.S. Army in Orleans France. Afterward he returned to Nogales to join the family business, marry and raise three children, Lee, Keith and Debbie. Paul used his worldly experiences to not only manage their business but help guide government bodies in managing border issues to help the flow of commerce between the United States and Mexico. No one was a stranger to Paul. Everyone he met, be it young or old, was a friend. He saw the good in people and never turned away someone in need. He loved to just start conversations with total strangers and shared stories with them as if he’d known them for years. It was an endearing quirk. Young folks seemed to gravitate to Paul, as he easily delved into conversations that showed his interest in their lives and future. Many young people were significantly influenced by Paul’s trust and encouragement. He showed them a world beyond the borders of Nogales that offered great opportunities. Family was important to Paul, like his brothers, he maintained relationships with his 2 sisters and their 36 first cousins in Nogales and throughout the country in California, Texas, New York, and in the Carolinas. Paul’s passing is the passing of an era for the community of Nogales and Southern Arizona. There will be a number of people who will miss his company, sense of humor, kindness, and generosity. Paul was proud of and survived by, son Keith and Daughter in Law Liz; Debbie Senday and Son-in-Law Gonzalo; seven grandchildren, and eight great-grandchildren, all who loved and cherished their “Pops”. He is also survived by his sister, Gertrude, and his sisters-in-laws Laurie and Roberta. Paul was preceded in death by his parents, Charles and Pearl; brothers Harvey and Bobby; sister Adele; and son, Lee. A funeral and memorial service is planned for: Wednesday, May 26, 2021 at 10:30 a.m. at La Mariposa resort, 1501 N. Houghton Rd., Tucson, AZ 85749. The burial service will follow in Nogales at the Nogales Jewish Cemetery (959 N. Bejarano St., Nogales, Arizona.) Wednesday, May 26, 2021 at 4 PM In lieu of flowers please consider a donation to Jewish Family & Children’s Services. https://jfcstucson.networkforgood.com/

Paul Bracker, passed away peacefully in his sleep this last Saturday at the age of 85. He was a kind, friendly and very generous person, who always made people feel welcome. He was intelligent, respectful, and a gentleman. As one friend put... View Obituary & Service Information

The family of Paul Barry Bracker created this Life Tributes page to make it easy to share your memories.

Paul Bracker, passed away peacefully in his sleep this last Saturday...

Send flowers to the Bracker family.