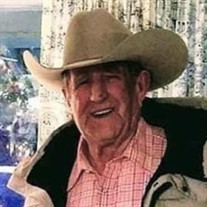 Ray Lee Harris, 73, was called to service in Heaven on Saturday, April 24, 2021, from Muscogee, OK. Ray was born on July 26, 1947 in Broken Bow, OK. He was the youngest of 11 siblings born to Andrew Jackson and Callie Harris. On August 8, 1969, Ray married Sheran DeNeen Holder in Hobbs, NM, and they would remain married for the next 36 years until her unexpected passing in 2005. Ray and DeNeen blessed the world with three amazing children in Andrew Jason Harris, Kevin Ray Harris, and Angela Denae Crawford. Jason blessed Ray and DeNeen with two grandchildren in Tyler and Kelbi. Kevin blessed them with two more grandchildren in Jaxon and Kolton. Angela and her spouse Alan Crawford blessed them with one more grandchild in Zolee. Ray was a Christian man that served the Lord for many of the years of his life. Ray and DeNeen even served the Lord for a few years with their Christian Children’s Ministry and traveled to other cities and states putting on huge kid crusades at several churches in those cities and states. Ray was always known to step up at any church he was a member of to do whatever it took to further that church. Though he will be remembered most for his elite construction skills and the physical labor and expertise in helping churches remodel their physical locations, he spent a lot of time helping in the church in many other aspects such as ministering to children and providing transportation so others could attend. While Ray was very proud of his dedication to the Lord and the work he put in for his Christian faith, there were many other things in his life to be proud of. Ray fought for the United States in the Vietnam War as a very young man. As a member of the 1st Cavalry Division in the United States Army, he was awarded The Army Commendation Medal for Meritorious Service in 1968 for his service in the Vietnam War. After returning to the states from the war, Ray worked the rest of his life in several other careers. Though Ray drove trucks for a living as well as operated a Holsum Bread Store, his construction skills were a main stay throughout his life. Ray worked for major construction companies for a few years before starting his own Ray Harris Construction Company. After a few years of working on his own, Ray was offered a very nice job to continue his love for construction with El Paso Natural Gas. He worked for this company for over 17 years before branching off again to start his own company with one of his sons in Harris Building & Development Inc. After just a couple of years on his own, he and his son were offered a deal too good to pass up to go to work with Western Industrial Resources. After several years with this company, he and both of his sons returned to work on their own, and started up what is today, one of Tucson, Arizona’s premier HVAC companies in Air Tropics LLC. After just a few years, Ray was able to retire. It was at this point that he returned to his roots in Broken Bow, OK where he was reunited with his first sweetheart, Ann Hudson. Ray would live out the final days of his life making memories with her and his family but continuing his love for construction by completely remodeling the home he and Ann shared. Though Ray was a jack of all trades and could do just about anything he wanted, from overhauling engines to building Christian Children Ministries, he will always be remembered as a Master Carpenter. Ray was a good Christian man. Anyone and everyone that met him will tell you that he was a one of a kind with the biggest heart. He did so much for so many and always put others before himself. He was a hard worker, Master Carpenter, jack of all trades, loving husband, caring father, amazing grandfather, and great friend. He will be missed by many and forever loved by all. A viewing/visitation will be held Saturday, May 15, 2021, from 9-9:30am at Canyon Del Oro Baptist Church, 9200 N Oracle Rd, Tucson, AZ 85704 -with the funeral services to follow at 10am. Pastor Troit Stowe will be officiating.

The family of Ray Lee Harris created this Life Tributes page to make it easy to share your memories.

Ray Lee Harris, 73, was called to service in Heaven on Saturday,...

Send flowers to the Harris family.