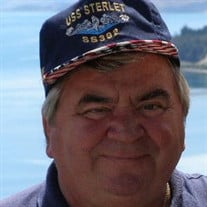 Richard Allan Jarenski, known to his loved ones as “Dick” or “Ski,” passed away peacefully on October 3, 2019. Dick loved life and loved people. He wanted to have a good time, but it was more important for him to make sure everyone else had a good time. One of his favorite sayings was, if you give love you get love, and he made sure everyone in his life felt deeply loved. Dick was born in Kingston, Pennsylvania on November 8, 1942 to parents Ralph and Helen Jarenski (deceased). He was raised in Forty Fort, PA and for a time by his Aunts Wanda and Delores (deceased), and Wanda’s husband Uncle Ed (deceased). After graduating high school, Dick enlisted in the United States Navy Submarine Service, and diesel submarines became a lifelong passion for him. He served for 10 years and left the service as a YN1(SS) - (Yeoman 1st Class). He was in great demand for his skill at organization and was transferred to six different submarines to whip them into shape during his time in the service. He was stationed for a time in Pearl Harbor and his final sub was the USS Sterlet (SS-392). This was his favorite sub and the one where he made lifetime friendships, especially with Frank Ciak (d. 1990) and Doug Furst, who were like his brothers. He left the Navy in Dec 1969 and eventually settled in Stevensville, Maryland with his wife, Sharon Philips Jarenski (d. 1994). Dick was proud to be an entrepreneur and self-made man. He began a career as a manufacturer’s representative for hardware companies and eventually founded his own sales agency, RAJ Associates. He was also involved in politics, and campaigned for county commissioner and founded the group the “Kent Island Resident’s Council” with the goal of establishing local control of development in the picturesque Chesapeake Bay community. On Kent Island, Dick loved to explore the bay and fish on his boat, Chase II. He retired from politics to focus on raising his daughters, Shelly and Aishley, after the death of his wife. Always ahead of his time, Dick met his life partner Susan Rainey on the internet in 1997. By 2000, he had relocated to Tucson, Arizona where he lived for the rest of his life. Susan and Dick loved to travel and Dick’s favorite trip was to Africa for a safari. An avid golfer, Dick took to desert life with the same enthusiasm he had for the Chesapeake Bay. Due to his abiding love for America and the Submarine Service, Dick spent his silver years finding ways to reconnect living sailors with each other and to remember those who were lost. He helped organize the White Mountain Sub Base and became commander. He created and became commander of the USS Sterlet Association and, along with Susan, ran five Sterlet reunions in various US cities. Finally, he assembled a display of ship’s patches for all the US Navy Diesel Submarines, with Susan’s assistance. The display resided in the Branson, MO Military Museum until it closed and now resides at the Arkansas Inland Maritime Museum in Little Rock, Arkansas. Dick was a Patriot Dick was preceded in death by his parents, Ralph and Helen Jarenski, his brother Ronald and his sister Dorothy, his wife Sharon Philips Jarenski and his best friend, Frank Ciak. He will be mourned by his life partner Susan Rainey, his daughters Shelly and Aishley Jarenski, his sister Barbara Lindsay, his brother Robert Azensky, and his best friend, Doug Furst. Dick will be buried at sea through the Navy’s burial at sea program; his ashes will be dispersed into the ocean from a submarine. Services will be held at 11:00 a.m. on November 8, 2019 at: Evergreen Mortuary 3015 N. Oracle Rd Tucson, AZ 85705 Immediately following the service a Gathering for Family & Friends will be held at: Tucson Elks Lodge #385 1800 N. Oracle Rd. Tucson, AZ 85705 (Food and Cash Bar) In lieu of flowers, donations can be made to: US Submarine Veterans Charitable Foundation Information available on their website at USSVI.org

The family of Richard Jarenski created this Life Tributes page to make it easy to share your memories.

Richard Allan Jarenski, known to his loved ones as “Dick” or...

Send flowers to the Jarenski family.