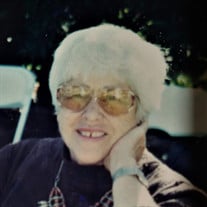 Rosemarie Steinbrenner-Eppstein (Roz) passed away on March 5, 2022 at the age of 94. Roz was born in Union City, New Jersey to immigrant parents, John and Rose Kiss, on September 10, 1927. She was the youngest of seven siblings and the last member of her immediate family to pass away. She was preceded in death by both of her husbands, Arthur Steinbrenner and Robert Eppstein. Roz grew up in Englewood, New Jersey, and as a young child witnessed the burning of the Hindenburg and attended the 1936 Berlin Olympics, meeting Jesse Owens on the ship travelling to Germany. When she was 13, the family moved to Palm Beach, Florida. When she was 13, her parents bought a house in Palm Beach, Florida, and she spent most of her time in Florida for the rest of her youth. She went to high school at a Palm Beach boarding school, Graham-Eckes Academy, where her math teacher was Arthur Steinbrenner. A few years after high school, she became reacquainted with her former teacher, and they fell in love and were married. Roz developed a love of art as a small child, and was encouraged in that passion by her parents, who provided art classes for her. She has been involved in the Tucson art community since her arrival in town in 1951. She taught and took classes at the Tucson Art Museum and was a secretary at the Museum for a number of years, and encouraged many others. Although she experimented with many mediums, painting was her main passion. She was a life-long learner, and painted up until she lost her eyesight in her last couple of years. Her artistic abilities and creativity also help her to see the potential in older homes, of which she bought and remodeled 8 during her years in Tucson. Roz was a gregacious person who loved and had an innate understanding of people. Her family could always depend on her for wisdom and support. Roz will be greatly missed by her daughter and son-in-law, Dan and Kathy Hartley, her son and daughter-in-law, Scott and Vangie Steinbrenner, by her step children, Bobby and Ricky Eppstein and Laurie Montano, and many grandchildren and great-grandchildren. A Celebration of Life will be held at the Tucson Botanical Garden for her on April 22, 2022. In lue of flowers, please make a donation to Tucson Junior Strings or to any other fine arts program for children in her name.

Rosemarie Steinbrenner-Eppstein (Roz) passed away on March 5, 2022 at the age of 94. Roz was born in Union City, New Jersey to immigrant parents, John and Rose Kiss, on September 10, 1927. She was the youngest of seven siblings and the last... View Obituary & Service Information

The family of Rosemarie Steinbrenner Eppstein created this Life Tributes page to make it easy to share your memories.