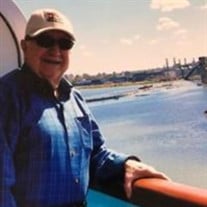 Samuel Sheldon Reiter January 6, 1934 &#8211; June 8, 2021 SSam was born in Detroit, Michigan to Irving and Martha (Forstot) Reiter. He was born with the last name of Greenberg, a name his grandfather chose when he moved... View Obituary & Service Information

The family of Samuel Sheldon Reiter created this Life Tributes page to make it easy to share your memories.

Send comfort and support when it's needed most.