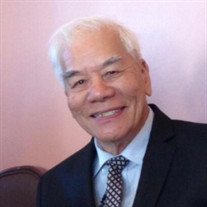 Shun Yiu Leung August 18, 1929 - December 4, 2021. It is with heavy hearts that we announce the passing of our beloved husband, father, grandfather, brother, and uncle on December 4, 2021. At age 92, he remained very healthy until his last week, succumbing to cardiovascular disease. He will be sadly missed by his wife, children, grandchildren, family members and friends. Shun was born on August 18, 1929, in Zhongshan, Guangdong province of China. He married his beloved wife of 57 years in Hong Kong, where they started their family. He and his family immigrated to the US, arriving in San Francisco, California, in 1975. Shun later obtained his culinary certification from the San Francisco Chinese Association. In 1980, he brought his culinary and entrepreneurial spirit to Tucson, Arizona, to open their family restaurant, The Magic Wok. After retiring from his culinary career in 1992, he and his wife spent their time traveling between states to support their children and family however they were needed. Shun continued to live a life celebrating his love of culinary arts, traveling with his family, and watching his children and grandchildren grow up. Shun is survived by his wife, Kam Chau Lau Leung of Tucson, Arizona; brother, Zhou Yang Leung; daughter, Winnie Leung Fung (David Fung), son Timothy Leung (Lorriane Louie), and son Keith Leung; and grandchildren, Ryan Fung, Kristin Fung Startt (Kurtis Startt), Danielle Fung, Chad Leung, Ethan Leung, Trevor Leung, Sabrina Leung, Michael Leung and numerous nephews and nieces. A private service will be held on Sunday, December 19, 2021, at Evergreen Mortuary in Tucson, Arizona.

Shun Yiu Leung August 18, 1929 - December 4, 2021. It is with heavy hearts that we announce the passing of our beloved husband, father, grandfather, brother, and uncle on December 4, 2021. At age 92, he remained very healthy until his last... View Obituary & Service Information

The family of Shun Yiu Leung created this Life Tributes page to make it easy to share your memories.

Send flowers to the Leung family.