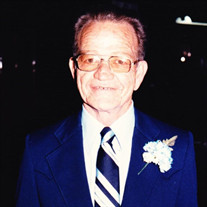 Thomas L. Bohmfalk, 91, of McNeal, Arizona, died peacefully in his sleep at St. Joseph’s Hospital in Tucson, Arizona, on March 13, 2020. He was born on December 1, 1928, in Bisbee, Arizona, to John Henry Bohmfalk and Lillian (White) Bohmfalk, the sixth of seven children. All had predeceased him except his sister, Nina Bingham, who lives in Logandale, Nevada. As a teenager he worked underground in the mines in Bisbee until a mining accident took the life of a coworker. He then left that occupation and enlisted in the Navy in 1947. He served proudly and honorably in the Pacific and Asian zones as part of an intelligence production unit for 18 years, when he moved to Riverside, California, where he served as a Recruiter until his retirement in 1967 as a Lithographer First Class. He was immensely proud of the opportunity afforded him to serve his country and to meet and serve beside many influential people. During his time in the Navy he met and married Rita Contreras in San Francisco, California. There were two children born to this marriage: Laura and Myra. In the early seventies he returned to Douglas, Arizona with his family where he owned and operated The Sun Press, a custom print shop. His mission in life was to help anyone experiencing a need. He would always place the resolution of that need above his own, tirelessly giving whatever help he was able to give. For many years he went regularly to clean his family’s plots in Evergreen Cemetery in Bisbee; he would also clean the war veterans’ area as well because he didn’t want them to be forgotten. Cochise College was a young institution in need of a printing operation. He sold his print shop and went to work for the college, establishing and operating a print shop where he continued to work until his retirement in 1992. During his time at Cochise College his marriage ended. In 1985 he met Florence (Pritchard) Seiple. They were married in Auburn, Indiana, in 1986, and purchased a home in McNeal, Arizona where they resided at the time of his death. The home had been vacant for several years and was in a state of disrepair. He devoted his spare time and all of his energy to resolving its need for renovation and this brought his talent for woodworking and gardening into play. He remodeled his home and planted many trees and flowers, creating a place of beauty. If he planted a seed, it would always grow and bloom. Animals and birds loved him, and he loved them all. They would gather around him whenever he was outdoors. They knew they were safe. Survivors include his wife, Florence, of McNeal, his daughters, Laura (Rick) Done, of Casa Grande, and Myra (Ruben) Palma, of Phoenix, 14 grandchildren, 29 great-grandchildren, and four great-great-grandchildren. They all reside in Arizona and Utah. Per his wishes, no services are planned. Cremation has occurred and he will be interred at Veterans Memorial Cemetery in Sierra Vista, Arizona, at a later date. We are shocked and devastated by his passing. He had experienced several serious physical issues in the past 15 years and survived. His last illness deceived us, appearing to be a simple one. Nobody, including the professionals attending him in the hospital, expected such an outcome; however, we know it was his duty to report when the Supreme Commander called. We are comforted by the fact that he no longer suffers pain. We will miss him forever.

Thomas L. Bohmfalk, 91, of McNeal, Arizona, died peacefully in his sleep at St. Joseph&#8217;s Hospital in Tucson, Arizona, on March 13, 2020. He was born on December 1, 1928, in Bisbee, Arizona, to John Henry Bohmfalk and Lillian (White) Bohmfalk,... View Obituary & Service Information

The family of Thomas Leroy Bohmfalk created this Life Tributes page to make it easy to share your memories.

Send flowers to the Bohmfalk family.