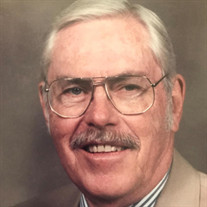 Victor Alden Christopherson, (May 12, 1923--June 11, 2020), WWII combat veteran, loving husband for 67 years to Georgia Marie (nee Ostler), father of Bryan (Christine) of Tucson, Vicky Begue (George) of Columbus, OH, and John (Kathleen) of Reno, NV; grandfather and great-grandfather, and the best friend to many anyone ever had. Dad was born in Salt Lake City, Utah, descendant of pilgrims, pioneers, and explorers. His family owned the oldest landscaping business in the city, and to this day its works and majestic trees still define the grounds of the capital and other public areas in the city. Like so many others, Dad’s family fell on hard times during the Great Depression. The family lost the business, and his father was forced to take the job of gardener at a large private estate. The only evidence of Dad’s impoverished childhood noted by his kids was perhaps his fondness for footwear, lots of it. He relished the weekly tradition of shoe and boot polishing, and from time to time could be overheard softly chuckling to himself as he did so. Dad served in the 20th Armored Division of the US Army from his deployment through the end of the war and into the early days of the Allied Occupation of Germany, before being recalled home along with many thousands of other GIs in anticipation of the invasion of Japan. While at sea, word came that the US had dropped a giant bomb on Japan, destroying an entire city. A few days later, as his ship approached New York harbor, the news came of Japan’s surrender. One can only imagine the joy and depth of feeling Dad and his lovely young wife Georgia experienced upon their long-delayed reunion. Dad and Mom moved to New York City after the war and, using the GI Bill, Dad entered Columbia University, where he earned his bachelors, masters, and doctorate. He served as assistant professor at Oklahoma State University for several years, as associate professor at the University of Connecticut for four years, and finally as a full professor and for many years the department chair of the Child and Family Relations department at the University of Arizona from 1958 until his retirement well over 30 years later. During his long tenure, he was greatly loved by generations of students, highly esteemed and respected by his colleagues, and was the recipient of numerous prestigious awards, including The President’s Club Creative Teaching Award and the Lifetime Achievement Award from the College of Agriculture. Dad had many interests outside of his professional life. He inherited his grandfather’s love of creating beauty through landscaping. Every home dad ever owned had a signature landscape that he created. He enjoyed long road trips, camping and fishing. He played guitar, particularly flamenco. He was a very social person and had many close friends who appreciated his quick wit and sense of humor, easy going manner and his genuine warmth and considerate nature. Dad is survived by his children, grandchildren, great grandchildren, his dear friend Dr. Wai-Fong Lee, and several old and dear friends. Dad was a kind and considerate man, wonderful teacher and guide. As we look back over our own lives, we know how very blessed we were to have such wonderful loving parents. Dad had a long, vigorous, rich life--a life filled with loving relationships and great accomplishment. He lived his life to its fullest. What more can any of us ask. Even so, he will be sorely missed. Even so. If you wish, send a donation in Dad's name to the Erick Christopherson Endowed Legacy Scholarship Fund (https://nvnursesfoundation.org/Donations/erick.php), or to Casa de la Luz Foundation, (https://casafoundation.org/donations/), or a check made out to: UAF/VChristophersonScholEndmt (memo: fund 40-11-6665) to: UA Foundation; P.O.Box 210109; Tucson, AZ; 85722-0109. To ensure the health and safety of our community, we are following all guidelines set by local, state and CDC officials. If you are planning on attending a service, please contact the funeral home in advance, so that we can plan accordingly.

The family of Victor Alden Christopherson created this Life Tributes page to make it easy to share your memories.

Send flowers to the Christopherson family.