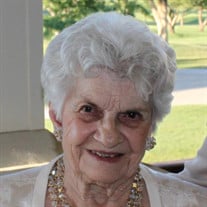 Viola (Vickey) Buescher&#8217;s motto might well have been, &#8220;pedal to the metal&#8221;. Vickey was a no stopping, multi-talented firestorm of a modern woman defined by an internal calculus that emphasized hard work and perseverance. It... View Obituary & Service Information

The family of Viola Mae created this Life Tributes page to make it easy to share your memories.

Viola (Vickey) Buescher’s motto might well have been, “pedal...

Send flowers to the Buescher family.