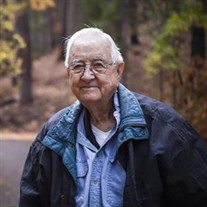 Virgil L. Jones, age 89, was promoted to the presence of the Lord in Tucson, AZ on Wednesday, January 6, 2021. Born on August 30, 1931 in Fountain City, Tennessee, to his parents Thomas Mack and Willie Mae Jones. Virgil enlisted in the United... View Obituary & Service Information

The family of Virgil L. Jones created this Life Tributes page to make it easy to share your memories.

Send flowers to the Jones family.