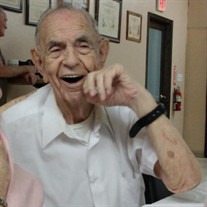 John 15:9-12 Walter Frank Dellow of Tucson, Arizona passed away on Friday, July 31, 2020 at the age of 88 peacefully at the VA hospital. Walter was born in Homer, NY to Father Walter L. Dellow and Mother Agnes Horton Dellow. The fourth of five children, Walter would help his father on the farm as a youngster. As he grew older and being concerned with the government and past society troubles, he enlisted in the military hoping to enter the Air Force. During the examination, he was tested on his intelligence levels and performance in office settings. With a high score he was given the opportunity to enter the Army Security Agency. He entered the Army and was taught the basic lessons in weapon uses for defense and the secrets of cryptography. After 11 months of training in the United States, he was deployed to Seoul, South Korea as a Staff Sergeant, where he served for another year. Upon arrival, he witnessed a Red Cross ship sinking and had to stay hidden for the duration of their trip to their destination. As a cryptographer, he played a very important role in the war. His speed and accuracy were very important and strictly monitored. He made friends and companions of the very few cryptographers stationed with him. His most memorable event taught him “Do what you are told”. His workplace was heavily guarded because his work was top secret. His experiences taught him discipline and reminded him of the severity of war. After a year he went to Tokyo, Japan for the next year. He met his wife before being deployed, at a dance hall in Dryden, NY and married Vivian Weaver in 1955. After three children, they followed Walt’s brother Edgar in 1959 to Tucson, AZ. A fourth child was born in Tucson, and then in 1969 they all moved to Douglas, AZ where he worked for the Arizona Credit Bureau Services for a few years. He coached and refereed baseball and he then went into business with a sandwich shop and did so well that he bought Seaman’s Dairy Cream and renamed it to The Dawg House with a contest for the high school. He then went into crime scene investigation with the Douglas Police Department. Once he retired, they moved back to Tucson and then followed his brother to Missouri in 1995 where he went into Presbyterian Ministry serving churches in Kansas and Missouri as an Interim pastor until his health sent him back to Tucson after 20 years, where he lived the rest of his life. Walter also had a wonderful hobby of being a magician. He delighted and entertained many people with his routines and taught many Christian messages to children. He was an active member of the Jaycees, Kiwanis, Lions Club and became an Exalted Ruler and District Deputy for the Elks while in Douglas, The Society of American Magicians and The Fellowship of Christian Magicians. He returned to the Elks in 2019 at the Casas Adobe Lodge. Walter is proceeded in death by his parents Walter and Agnes Dellow, brother Edgar Dellow, sisters Alice Mulvaney and Shirley Sovocool. And granddaughter Brandy Kerber-Dellow. Walter is survived by his wife of 65 years, Vivian, 4 children, Pamela Beal, Michael Dellow, Edward (Toni) Dellow and Patricia (Stacy) Phelps. He leaves behind 10 grandchildren, Jennifer, Sarah, Michael Jr., Jon Robert., Maggie, Nikki, Jacki, Felicia, Jessica and Josh. Also 11 great grandchildren, Alexis, Jayson, Kaden, Vaeda, Vienna, Amber, Quenten, Zelda, Xander, Emmy, and Dexter, his sister Dorothy McAllaster, and his beloved dog, Mitzy, as well as many nieces and nephews. Walter will be laid to rest at the Veterans Memorial Cemetery on August 18, 2020. To ensure the health and safety of our community, we are following all guidelines set by local, state, and CDC officials limiting the number of persons in attendance to 10.

John 15:9-12 Walter Frank Dellow of Tucson, Arizona passed away on Friday, July 31, 2020 at the age of 88 peacefully at the VA hospital. Walter was born in Homer, NY to Father Walter L. Dellow and Mother Agnes Horton Dellow. The fourth of... View Obituary & Service Information

The family of Walter Frank Dellow created this Life Tributes page to make it easy to share your memories.

Send flowers to the Dellow family.