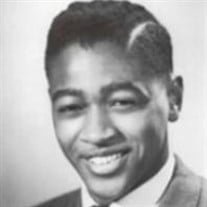 Memorial Obituary Entered into Eternal Rest Monday, January 24, 2022 In Remembrance of Wilfred “Will” Sayles Wilfred Sayles was born April 14, 1929, to Walter Sayles and Lucy Florence Pinckney Sayles in Cornwall-on-Hudson, New York. Will was the second son born into the family and the second of four children – Lucy Sayles (deceased); Benjamin “Benny” Sayles (deceased); and Mary E. Sayles Macklin (deceased). Will’s father ,Walter, was a lumber Foreman. His mother, Lucy, was a loving wife and a devout Christian who attended the A.M.E. Zion church in Cornwall where Will was baptized on April 5, 1942. Will’s parents represented the first generation of African Americans to truly qualify as free negroes, although the road was long and bumpy. As the only African American in his class, Will completed his secondary education at the Cornwall-on-Hudson High School, graduating June 23, 1947, with accolades. He was presented the esteemed “Best All Around Senior Award” and the “Award to the Senior Having Contributed the Most to the Success of the School Paper, ‘The Roving Reporter’,” enormous acknowledgements bestowed upon an African American man during such turbulent times of racial discord. Will went on to obtain his certification in Electrical Technology from the State University of New York Institute of Applied Arts and Sciences in White Plains, New York August 8, 1950. After he faithfully served his country as Personnel Administrative Supervisor in the United States Army, Will began his career with IBM January 19, 1953, and retired as Staff Financial Analyst after 31 years on January 1, 1984, at the young age of 54. Will has lived his life with the importance of service to others through selflessness and sacrifice, which have been the key ingredients to his gratification and happiness. Where some only live their lives to solve the problems they encounter or advance their personal ideals, Will sought to pursue peace, harmony, and happiness for the sake of those we love. He loved many and gave generously knowing there are no limits to generosity. Will’s children have always felt that he ruled and will continue to “rule the roost.” His adult children, well over the age of 50, still whisper to one another, “don’t tell Dad I’m going on vacation again,” a powerful testament to Will, a disciplined father, a survivor of the Great Depression who always encouraged his family to pay yourselves first, and the importance of having a smart, long-term financial goal. A staunch opponent of fluoridated water, Will was an unrelenting proponent of proper nutrition & diet by “eating to live” which has likely contributed to his ability to maintain all his faculties, without compromise, throughout his entire life. Will believed in community activity from a grass roots level for social justice and economic changes. He invested valuable time preparing local area applicants for employment interviews. His authority and leadership were observed, and his counsel was often sought by many. Will has always had an interest in exploring the world where he spent time traveling abroad to experience and understand other cultures in Egypt, Greece, Israel, London, and Mexico. When you experience the world around you, every new experience that is different from your own will open your mind and enrich your life forever. From 1953 to 1976, Will was united in marriage to Shirley Irene Smith (deceased) of Newburgh, New York. Of this union, there were four wonderful children. Will was preceded in death by his father, mother, sisters, and a brother. He is survived by his firstborn son, Arnold A. Sayles (Karrla), second-born son, David A. Sayles, and daughters, Dyan M. Sayles- Carney (Benjamin A. Carney) and Sharon E. Sayles-Dunham (Jerry L. Dunham); grandchildren, Nathaniel A. Sayles, Brionna E. Sayles, and Victoria I. Sayles; great grandson, Ashton Rion Sayles; and many nieces and nephews. John 16:22 And ye now therefore have sorrow: but I will see you again, and your heart shall rejoice, and your joy no man taketh from you.

The family of Wilfred Sayles created this Life Tributes page to make it easy to share your memories.

Send flowers to the Sayles family.