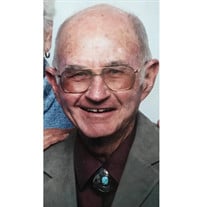 William H. Brown passed away peacefully on November 24 at Northwest Hospital in Tucson. Born on March 18, 1933 in Yakima, Washington, Bill grew up on a family farm near Wapato, Washington. He graduated from White Swan High School in 1951 and earned his BS degree at Washington State University (Pullman) in 1955. Bill obtained his PhD at the University of Maryland in 1959. It was there in College Park that he met Virginia E. McKenzie, whom he married on February 2, 1957. They moved to Tucson in 1959, where he began teaching at the University of Arizona and conducted groundbreaking research measuring the effects of DDT in dairy milk as well as mentoring many graduate students from around the world. They raised two sons, William P. Brown and Robert C. Brown. Bill retired in 1994 and enjoyed traveling the country with Virginia and welcoming regular visits from his son, daughter-in-law, and granddaughters. William was a member of Trinity Presbyterian Church, having served as an elder. He is preceded in death by his parents, William W. Brown and Mary George Brown, his wife Virginia Brown and his son Robert. He is survived by his son William P. Brown, daughter-in-law Gail K. Brown, and granddaughters Ella R. Brown and Hannah. G. Brown, who live in Decatur, GA. He will always be remembered by his generosity, which knew no bounds, and his vitality, which he embodied in so many lifegiving ways for family, friends, and neighbors. During his retirement, he excelled in carpentry and enjoyed making furniture for others as gifts. He loved cultivating cacti, turning his yard into a veritable wonderland of desert flora. He lavished attention on his granddaughters, equipping them for success in the world. He was a caring and inspiring father to his two sons. The family wishes to express their thanks to the heroic nurses and doctors at Northwest Hospital and the staff at Foothills Vista Adult Care Home, where he received loving care the past several months. According to his wishes, the family has chosen cremation with arrangements made by Evergreen Mortuary and Cemetery and encourages donations to the Salvation Army, Bill’s favorite charity. A service of celebration is planned in the spring for family and friends.

William H. Brown passed away peacefully on November 24 at Northwest Hospital in Tucson. Born on March 18, 1933 in Yakima, Washington, Bill grew up on a family farm near Wapato, Washington. He graduated from White Swan High School in 1951 and... View Obituary & Service Information

The family of William H. Brown created this Life Tributes page to make it easy to share your memories.

William H. Brown passed away peacefully on November 24 at Northwest...