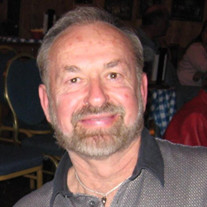 Dr. Yar Petryszyn, 75, of Tucson, Arizona, passed away on Thursday, December 24th, 2020 with his friend Juanita by his side. Yar was born May 10th, 1945, near Radldorf, Germany to Petro (Pete) and Teodozia (Lola) Petryszyn. He immigrated to America in 1950 and settled with his family in Ulysses, Kansas. He graduated from Grant County High School before attending Fort Hays State University where he received a Bachelor’s and Master’s of Science in Biology and Zoology. While completing his Master’s program, Yar was drafted to the Army during the Vietnam War. He served for two years and then attended the University of Arizona where he received a Doctorate in Ecology and Evolutionary Biology in 1981. Yar stayed on as a Professor and the Curator of Mammals at the University of Arizona until his retirement in 2006. Yar traveled with National Geographic and the Smithsonian as the naturalist on numerous trips. Most recently, and most certainly what he would consider one of his greatest accomplishments, Yar published the Memories and Stories of Pete and Lola Petryszyn, the lovingly curated history of his family and the legacy that will live on after him. The chronological events of his life do not do justice to the life Yar lived. Yar was a modern-day explorer and adventurer, traveling to six of seven continents and countless countries. He was a man consumed by wanderlust, had a thirst for knowledge and an unquenchable curiosity. He believed in the power of learning and enjoyed imparting his collection of wisdom on his students, nieces and nephews (and really anyone willing to listen.) He was a ‘forever professor’, never quite truly retiring from teaching, and could make any simple daily task evolve into lecture. (An ear of corn has 846 kernels.) Yar loved a good Bloody Mary, especially if made by his sister, Paula, traditional Ukranian food, mushroom hunting, exploring new places and a can of Vienna Sausages that he didn’t have to share with anyone. He adored his nieces and nephew, but when it came to his great nieces and nephews, they could do no wrong. He found his favorite students in his great nieces and found joy in sharing his love of learning with them. Yar is preceded in death by his mother and father. He is survived by his sisters, Maria Carone and Paula (Kenny) Cook, his nieces, Lisa (Stan) Kong, Erin (Matt) Aldridge, Leah Cook, and Tara (Mando) Dipp and his nephew, Dominic (Misty) Carone. He is deeply grieved by his great nieces, Bailey, Blake and Brooklyn Aldridge, Delilah Dipp, Mia and Margo Carone and his nephews, Alejandro and Remington Dipp. He was surrounded in love by close friends at the end, including John and Carolyn Davis and Juanita Martin and will be missed by the numerous other friends he collected along his adventures. Yar started a tradition on his whale trips to San Ignacio Lagoon in Baja California, Mexico of tossing a cup of sugar in the ocean as a remembrance. The following words are from a poem he wrote about the tradition: Each grain a sweet memory – Of the ones we loved Who are gone Yet so near. As we tossed a gift of memories to the sea – Of the ones we loved Who remain so dear A sense of loss swept over me – Tears flowed free Tears more precious than – All the pearls of the sea. Yar was the epitome of a life well lived and although he is gone, he will be remembered by the god he believed in – knowledge, nature, and the universe. We will forever find his memory in the new things we learn, the time spent appreciating the crashing waves or quiet rattle of an aspen and as we gaze upon the stars above. A memorial will be planned when it is safe to do so. In lieu of flowers, the family would prefer donations to the OSU Foundation, Marine Mammal Institute Fellowship Fund. Checks may be mailed directly to the OSU Foundation at 423 SW Research Way, Corvallis, OR 97333-1068 or the Marine Mammal Institute at 2030 SE Marine Science Dr. Newport, OR 97365. To make a gift online, please go to https://www.osufoundation.org/mmi . From there, you can select the Marine Mammal Institute Fellowship Fund.

Dr. Yar Petryszyn, 75, of Tucson, Arizona, passed away on Thursday, December 24th, 2020 with his friend Juanita by his side. Yar was born May 10th, 1945, near Radldorf, Germany to Petro (Pete) and Teodozia (Lola) Petryszyn. He immigrated to... View Obituary & Service Information

The family of Dr. Yar Petryszyn created this Life Tributes page to make it easy to share your memories.

Dr. Yar Petryszyn, 75, of Tucson, Arizona, passed away on Thursday,...

Send flowers to the Petryszyn family.