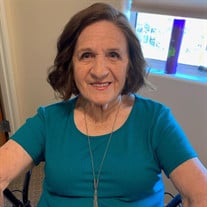 Althea Harvill, Born at home on Thanksgiving Day 11-26-1936. She entered into Paradise on July 3rd 2020 with her Husband and daughter by her side. She was born in California and lived there until she and her family moved to Arizona in 1974. Althea married the love of her life on October the 9th, 1954. They were teenage sweetheart's and have been dating for 70 years. This past October we celebrated their 65th Wedding Anniversary at Victory Worship Center with many friends and family. She attended Victory Assembly of God since 1974 the first time we walked into the church we knew it was home. She was proud of her faith in the Lord Jesus Christ and would share her testimony each and every time someone would listen. She was preceded in death by her father Ernest Ross, mother, Xenia Iona, Baby son, Ernest Ross, Great granddaughter Jericho Raine. Sister's, Margaret, Edna Mae, Ruth, and her brother Jackie. She leaves behind her husband of 65 year's Alford Harvill. Her sister's Betty Jean, Carol Lee of Oregon. Her 3 children, Ray (Julie) of Chino Valley, Cindy (Steve) Pennell of Tucson and Nancy (Jeff) Whitehurst of Bakersfield, California. 15 Grandchildren, Michael Ray, Justin, Sara, Monica, Stacie, Leslie, Stefanie, Eddie, Kori, Sandie, Shannon, Lindsay, Jeffrey Jr., Jaylene and Jacob. 27 Great-Grandchildren. Mom was a true Proverbs 31 woman. She loved her family deeply and was always a phone call away. You could always find her in her kitchen cooking up a homemade meal along with a pie or her amazing cookies. God was her number one priority and Dad her second. She was a woman of prayer and many times us kid's would see her go into her prayer closet seeking the face of God. Because of her prayer's her children have followed the Lord, because of her prayers her children came back to the Lord. Because of her prayers her grandchildren know and love the Lord. Because of her prayers her great-grandchildren knows the Lord. Mom and Dad traveled the country when they retired. They would spend the summer's in Prescott AZ staying on the Assembly of God's campground visiting her son and family who also lived on the campgrounds. When mom was diagnosed with Alzheimer's and dementia they decided to make one last trip to family and friends. Mom also was a homemaker and housekeeper to many. Mom didn't believe in light cleaning she did deep cleaning every time she cleaned their home. At the end of her working day's she was a caretaker for people who had Alzheimer's and dementia. Who would have thought that mom would also be diagnosed with the same disease. In 2018 we placed mom in a memory care home Solterra. We often seen mama holding the hand of another resident and telling them that everything is going to be alright. And of course we would see and hear mom praying for another resident. Mama had so many names by the staff who loved on her. I would see worker's from other villa's come to mom's villa before they started their shift just to give her a hug and say that they loved her. One of her names was Mama Althea. Mom contracted the Covid-19 on the 22 of June and was admitted to Northwest hospital. On June 26th we brought Mama home to be with her husband for her last day's on earth. We must say goodbye for now but we will see her again on the other side. Goodbye to an Amazing wife, Mother, Daughter, Sister, Grandmother, Great-Grandmother, Aunt and friend. Funeral will be at Evergreen Cemetery on Oracle Rd. Graveside service with Pastor Steve Collin's of Flowing Wells Assembly of God at 10:00 AM. Due to the Pandemic they will only allow 10 people to gather. But people are encouraged to attend in or by their cars along with social distancing. To ensure the health and safety of our community, we are following all guidelines set by local, state and CDC officials.

Althea Harvill, Born at home on Thanksgiving Day 11-26-1936. She entered into Paradise on July 3rd 2020 with her Husband and daughter by her side. She was born in California and lived there until she and her family moved to Arizona in 1974.... View Obituary & Service Information

The family of Althea Harvill created this Life Tributes page to make it easy to share your memories.

Send flowers to the Harvill family.