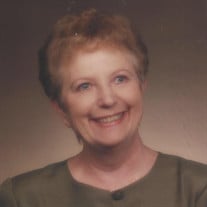 Betty Louise Napier, 91, of Tucson, Arizona, wife of the late Boyce “Clay” Napier, passed away January 4, 2021. Born in Beaumont, Texas, she was the daughter of the late Emery and Valona Cheek. Betty studied commercial art at North Texas State, and was just one semester away from graduating when she left to marry Clay. She worked as a homemaker, actively supporting her children in their endeavors, such as serving as a leader of a 4-H sewing club. She was quite creative and adept at sewing, producing stunning outfits for herself, her children, her husband, and later, her grandchildren. She even sewed doll clothes for her children’s dollies. While her children were growing up, she, along with Clay, took their children on excursions throughout the United States. Later, once her children were grown, she supported her husband’s work by retrieving articles from the Internet. Based on the information he gleaned from these articles, Clay wrote AG A.M., a publication on the day’s agricultural affairs. This publication was for the eyes of the President only. Betty enjoyed not only expressing herself through sewing, but also through square and round dancing with Clay, and would sew matching outfits for herself and Clay for these occasions. After Clay passed away, Betty continued her formal education by studying physical anthropology at George Mason University in Fairfax, Virginia. Later, she continued her education informally, reading everything she could lay her hands on about Russia, especially Russian history, but also Russian literature. She is survived by her daughters: Kerr Lynn Napier and Kay Napier Patteson; and grandchildren: Ayesha Aria Senn, Nicholas Clay Napier, Crystal Pearl Patteson, and Robert Byron Patteson. The funeral service will be conducted at Evergreen Mortuary and Cemetery at 3015 N. Oracle Road, Tucson, AZ 85705 on Tuesday, January 11, 2021 at 10:00 a.m.

The family of Betty Louise Napier created this Life Tributes page to make it easy to share your memories.

Betty Louise Napier, 91, of Tucson, Arizona, wife of the late...

Send flowers to the Napier family.